And the problem of the 'girlification of science' 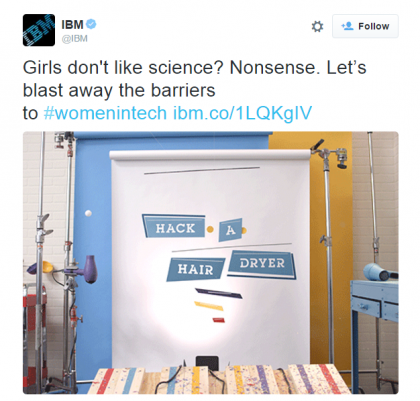 As someone who does social media for a living, I appreciate a good hashtag campaign. It can unite people around the world for a single cause and facilitates conversations that never could happen without the internet.

IBM’s #HackAHairdryer campaign was well intentioned; it wanted to promote women already in STEM careers and encourage young women to go into them. Unfortunately in trying to fight gender stereotypes, IBM propagated one.

The above screenshotted tweet led to a page featuring “26 innovations by 26 innovative women,” with the hope it will inspire women to pursue careers in tech fields, or more specifically tech fields at IBM.

Like any advertising campaign though, the wrong hashtag can cause immense public backlash. Only two months ago, EDF Energy was called sexist for their #PrettyCurious campaign. IBM faces that same criticism now for #HackAHairdryer.

IBM has since admitted the company “missed the mark,” deleted the tweet and ended the campaign.

The problem with many of these campaigns is the idea was best explained by Emily Schoerning, the Director of Community Organising and Research at the UK’s National Centre for Science Education. In a blog post during the #PrettyCurious campaign, she wrote, “I hate this presumption that STEM stuff needs to be ‘girlified’ to appeal to women.”

In an exam administered to 65 developed countries, 15-year-old boys in the Americas and Western and Northern Europe scored better on science exams than their female counterparts. However, girls scored much better than their male counterparts in countries in Asia, the Pacific Islands, the Middle East, and Eastern and Southern Europe, although overall scores were slightly lower.

So although women have the capability for success in STEM, cultural stigmas in the US, Canada and Britain (among other countries), drive them away from this career path. According to the New York Times, this is due to gendered stereotypes that form around the time a child is four years old. STEM careers are seen as “boy jobs,” though that’s clearly not the case.

Plenty of campaigns have more properly addressed this gender gap. After disgraced Nobel Prize winner Tim Hunt said that women were too sensitive and too distracting to male scientists in a lab setting, women scientists, engineers researchers and lab workers took to Twitter to call out Hunt and celebrate science with #DistractinglySexy.

In August, engineer Isis Anchalee created #ILookLikeAnEngineer after she was featured in an advertisement for tech company OneLogic and social media users said she was too pretty to be an engineer. Organizations like Girls Who Code help female high school students get real world experience at tech companies like Facebook, Twitter, and Amazon.

All of this drives at the greater problem with the “girl-ification of science,” which is inherent in its name. Science is defined by Merriam-Webster as “the state of knowing: knowledge as distinguished from ignorance or misunderstanding.” Science should be simplified when needed to explain complex concepts to a greater audience, not because of a person’s sex.

In altering how science is shared with 50 percent of the population due to outdated stereotypes, one promotes a greater ignorance, literally defying the foundation of science. We need to stop “girlification” and stop limiting the understanding of science based on sex, gender expression, race or any other factors besides the desire to understand the world around us. And we should be encouraging all children — all people — to do that.