Computers get hot. Heat is bad for computers. To whisk it away, we use a combination of heatsinks and fans … Continued 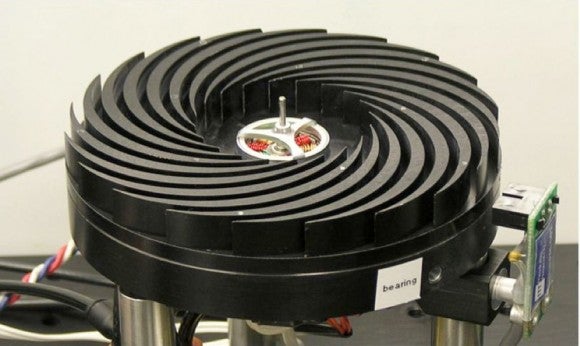 Computers get hot. Heat is bad for computers. To whisk it away, we use a combination of heatsinks and fans to snatch heat away from the internals and blast it out of the computer’s case. But Sandia has a concept that combines the two in a way that, they claim, increases heat-removing efficiency by up to 30 times.

Essentially the Sandia Cooler is just a combination heatsink/fan, which, now that we think about it, is kind of obvious. It’s a heatsink that spins at 2,000 rpm–slow for a fan–but is more efficient because it actually lifts off the chip, floating in midair by about a thousandth of an inch, removing thermal resistance. The air is drawn up through the center of the spinner and flung out through the grooves, which look mostly like a curved heatsink. Because the entire thing moves, it also cuts down on dust buildup, which has a serious effect on a cooling system’s efficiency. Oh, and due to its speed and the way it floats (sort of like hydroplaning), the system is much quieter than typical fans.

The creation has already been optioned by a computer company, so we should actually see it in machines relatively soon.