After a couple of delays, NASA finally launched its five-rocket barrage into the upper atmosphere this morning in an attempt... 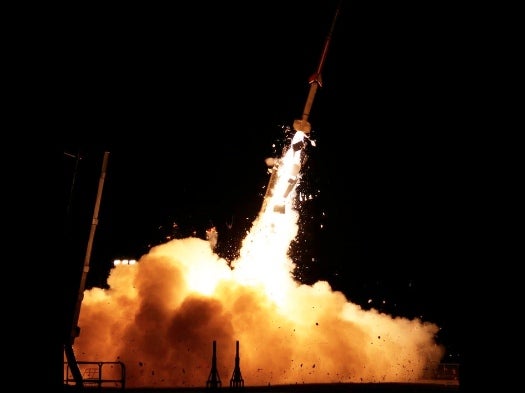 After a couple of delays, NASA finally launched its five-rocket barrage into the upper atmosphere this morning in an attempt to study the winds at the very edge of space. The ATREX (Anomalous Transport Rocket Experiment) mission successfully lobbed all five rockets into space from Wallops Flight Facility in Virginia with 80 seconds of separation between each rocket, creating a dazzling display of fireworks for anyone who happened to be awake and watching on the East Coast at 4:58 a.m.

Each of ATREX’s sounding rockets released a harmless chemical tracer into the atmosphere, creating wispy, milky white clouds some 50 miles above the normal cloud layer. Up there at 60-65 miles up the winds are very different than they are closer to the ground. A high-altitude jet stream moves at a typical tick ranging from 200 to more than 300 miles per hour, moving atmospheric particles rapidly from middle latitudes to polar regions. This is also the place where our atmosphere has its first interactions with space weather and where strong electrical currents can occur in the ionosphere, sometimes impacting radio and satellite communications.

As such, it pays for NASA to understand as much as it can about how the wind blows up there. All of the rockets dispersed white tracer chemical, while two of them carried instrument payloads that took direct measurements of pressure and temperature within the high-altitude jet stream. The video below shows an abbreviated breakdown of the five successive launches and the sky overhead, but scroll down further if you want the unabridged visuals and audio from this morning’s rapid fire rocket fireworks and the high-altitude smoke rings they left behind.