With the Space Shuttle program winding down, both NASA and several commercial ventures are developing next-gen rocket technology that will... 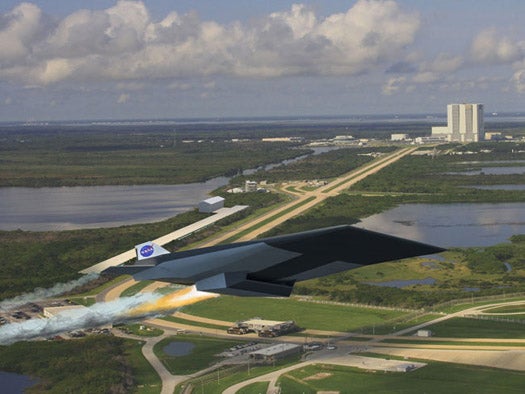 With the Space Shuttle program winding down, both NASA and several commercial ventures are developing next-gen rocket technology that will hurl the next iteration of space vehicles into the sky. But NASA acknowledges that rockets aren’t the only – or even the best – way to get into space.

Engineers at the space agency’s Kennedy Space Center in Florida are exploring future space launch schemes that could see spacecraft flung into the heavens by a massive railgun or launched to the upper atmosphere aboard supersonic scramjets. Or, even cooler: both.

If space launches are anything, they’re expensive. As such, launch vehicles that are reusable (like the space shuttles) are key to keeping costs under control. One such scheme for reusable launch craft involves ferrying payloads to the upper limits of the atmosphere aboard scramjets, those air-compressing, high-speed jets with theoretical top speeds more than four times faster than the fastest air-breathing jet engines.

In such a scheme, a payload vehicle (holding, say, a satellite) would piggyback to high altitude aboard the scramjet, which in theory could reach near-orbital speeds. From the upper atmosphere, the payload vehicle would launch from the scramjet propelled by something akin to the second stage of a booster rocket, putting the satellite or even a manned vehicle into orbital space without the incredible thrust needed to launch it from the ground.

But how does NASA plan to get the scramjet to the supersonic speeds necessary for sustained flight? Picture a huge railgun rising from the ground at Kennedy Space Center. Using an electrified track stretching for miles, the track would use a magnetic field (or perhaps gas propulsion, or even magnetic levitation – this stuff is all still very much on the drawing board) to accelerate scramjets to otherworldly speeds without expending the huge amounts of chemical energy needed to fire a rocket booster. Once a scramjet is moving fast enough, the jet engine would take over and propel it spaceward.

For now rockets are still NASA’s principle launch vehicles, so don’t expect any spacecraft-hurling railguns or regular hypersonic flights to the edge of space in the immediate future. But these technologies already exist in some nascent form or another. Both NASA and DARPA have been dabbling in scramjet technology for years, creating a vast body of knowledge and data for engineers to build upon. For their part, railguns have been around for nearly a century. All the technologies involved need further refinement, but none are out of reach.

Put another way: NASA is dreaming up massive railguns to launch hypersonic space vehicles into the atmosphere at blinding speeds. What’s not to like? 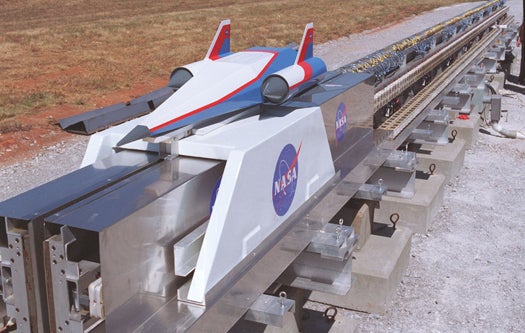