How We’re Creating “Terminator Vision” in Your Future Contact Lenses

“We made a lens that displays a single pixel that can be turned on and off wirelessly. An integrated circuit... 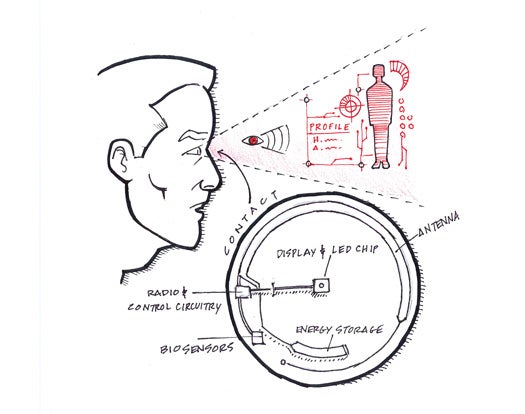 “We made a lens that displays a single pixel that can be turned on and off wirelessly. An integrated circuit stores the energy, and a light-emitting diode shoots light toward the eye, but the optics are tricky. You can’t focus on something that’s that close. To correct this, we put a series of tiny lenses between the LED and the eye—imagine holding your finger too close to your eye so it’s blurry; you could bring it into focus by putting a magnifying glass between your eye and your finger.

So far, our display has only one pixel. But someday you could use the lenses to consolidate all the displays you interact with on a daily basis—your clock, computer, television and phone—into one personal display in your eye. In the distant future, your contact lenses could augment your reality. If you were in a bare hallway, the computer in your contact could put paintings on the wall.

The light-emitting part of the contact lens is opaque, but these little dark spots shouldn’t obscure vision. The control circuitry and the radio harvest energy from a transmitter at the edge of the lens and communicate with the world. They don’t block the view either. We don’t have permission to test the lenses on humans yet, but animals have worn it, and the lens was safe and functional.” —Babak Parviz, electrical engineer at the University of Washington, as told to Flora Lichtman