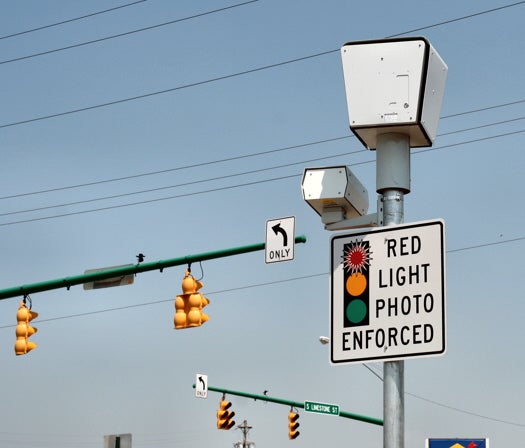 An ordinance before the city council of Iowa City, Iowa, would prohibit automated machines from issuing tickets without a human police officer present. Last night, the bill passed the [first of three steps needed to become law.

The ordinance got its start as a petition against red light cameras, which automatically record the license plates of cars driving through red lights and then send fines to the car owner. Red light cameras have flaws: They can’t check the license of the driver, and sometimes they catch legal right turns on red as well. Studies on the effectiveness of red light cameras in reducing accidents are tepidly in favor. But safety concerns aren’t really the main objection people have to red light cameras.

Really, it’s about fear of robots.

The Iowa City ordinance would also prohibit law enforcement from using license plate-reading devices, or any domestic drone system, to enforce traffic law violations, unless there is an officer present. This would end red light cameras, which work by monitoring intersections continuously and automatically mailing fines to violators.

License plate readers work similarly, and can be integrated into a system where they detect and fine “scofflaws,” as this licence plate-reading device manufacturer advertises. Drones, at least ones used to enforce parking violations, would end up much like police dogs, as an extra sensing platform brought out for specific reasons, rather than an ambient and autonomous apparatus on patrol. 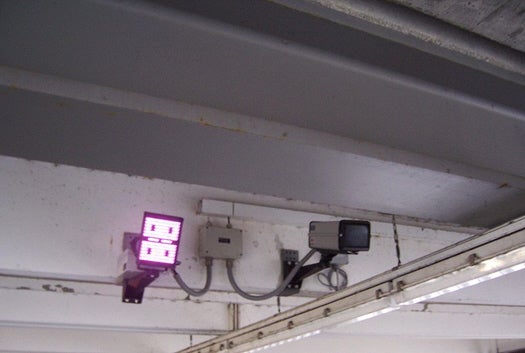 Automation is the greatest promise of these robots, and the proposed ban strikes an interesting line between public safety and privacy. Excepting false positives, red light cameras don’t punish undeserving people. They very specifically catch a crime, one that lends itself to automation. Making it so only human officers can issue fines for this crime feels like a step backward.

License plate-reading devices are less about public safety and more about public order. When used for parking enforcement, they catch people who skirt fees or miss payments, fine them, and then store that data as potential evidence in case of disputes. This is clearly a privacy issue, but it’s also the same thing a parking lot attendant could do with a camera and a notebook. Banning automation just reduces the number of violators who will be caught.