To Keep a Steady Stream of Satellites Going Up, DARPA Wants to Launch Them from Airplanes

Launching satellites from launchpads is cool and everything, but if DARPA has its way the military could soon be launching... 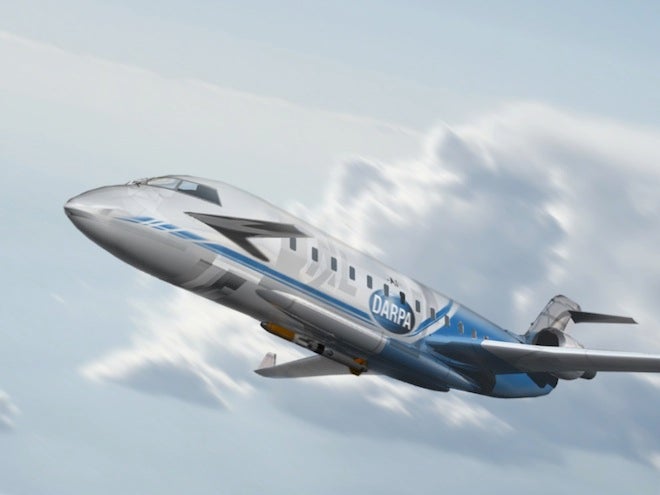 Launching satellites from launchpads is cool and everything, but if DARPA has its way the military could soon be launching small satellites from airliners, granting the Pentagon the ability to put satellites aloft from virtually any airfield and at a fraction of the cost.

The $164 million Airborne Launch Assist Space Access (ALASA) program is aimed at getting satellites in the air quickly, cheaply, and from anywhere rather than from a limited number of launch sites. Airplane-based launch systems could get satellites into space on a 24-hour turnaround. That means that in a pinch the DoD could deploy numerous new satellites, though DARPA’s solicitation stops short of detailing exactly what kind of pinch that might be.

Airborne launch platforms cruising at just 25,000 feet would place the initial launch at an altitude that’s above much of the Earth’s denser atmosphere. Such a system would also provide the launch vehicle–likely something very much like an aerially launched missile–with an initial velocity, so the rocket wouldn’t be starting from a standstill. That should trim the cost-per-pound of payload–DARPA hopes to cut costs by two thirds, from up to $30,000 per pound now to less than $10,000 per pound in the future.

The initial launches won’t be that cheap however. DARPA wants ALASA to demonstrate a dozen launches of 100-pound payloads into low Earth orbit at a cost of $1 million per launch as soon as 2015. If ALASA can do that, the Pentagon will be well on its way to making every Air Force base in its portfolio a potential satellite launchpad.

That could be key to future military engagements of course, hence DARPA’s interest. Cyber attacks and anti-satellite weapons both pose a threat to the defense satellites the U.S. military depends on. In a scenario in which systems like GPS and military intelligence or communications satellites are compromised, the military could quickly replenish its satellite supply from any airfield on the planet.