If you want to test an aircraft, a race car, a motorcycle, or just about anything that’s going to be... 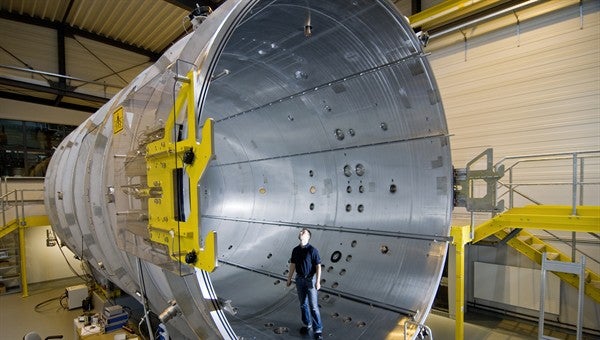 If you want to test an aircraft, a race car, a motorcycle, or just about anything that’s going to be slicing its way through the fluid that is air, you put it through wind tunnel trials. But how do you test a spacecraft? If you’re the German Aerospace Center (which goes by its German acronym DLR), you build a “space tunnel”: an 8,344 cubic foot vacuum chamber capable of space-like temperatures hovering just above absolute zero.

The new lab–known as STG-ET, for the German acronym for “Göttingen Propulsion Beam Simulation Facility – Electric Thrusters”–will be a boon for European spacecraft research, particularly in the realm of future space propulsion systems. The chamber is large enough to test huge sections of satellites or entire electrical propulsion systems–or both at the same time.

That’s key. Electrical propulsion systems, like ion engines, generally work by ionizing atoms of a propellant like xenon gas, accelerating them in an electric field, and ejecting them through a jet to create thrust. Pound for pound, they are far more efficient than chemical thrusters and largely viewed as a means to deep space travel, but they also have some unique drawbacks. Chief among these, at least as it pertains to satellites, is the plume of ionized particles left in the spacecraft’s wake. Some of these particles end up in contact with the exterior of the spacecraft itself and can foul things like solar panels that are critical to keeping a spacecraft operational.

At DLR, spacecraft engineers will be able to research these effects and–with any luck–mitigate the problems they cause. But all future spaceflight impact aside, the STG-ET is hands-down one of the coolest new pieces of lab equipment we’ve seen in awhile.