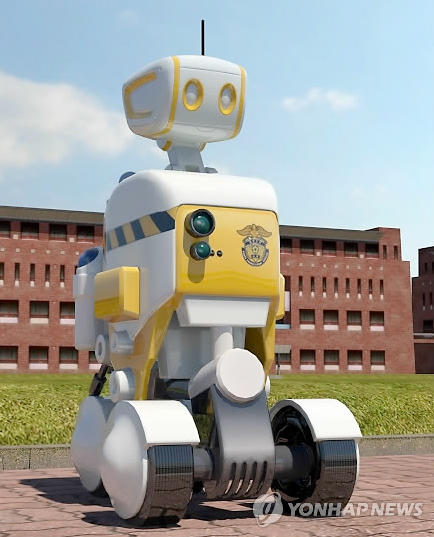 Prototypes of a prison guard robot are set to begin a test run in March, according to the South Korean news agency. Yonhap News Agency
SHARE

The possibility of robot workers raises a certain type of futurey allure combined with a sense of danger — in a variety of settings, they could help humans work better and faster, but they could also replace us, or worse, maim us. So how are we supposed to feel about the news of a new troupe of robot prison guards? It’s awesome. And terrifying.

Robot guards are coming to a South Korean jail next spring, according to the Yonhap news agency. The guards are 5 feet tall and equipped with four wheels, a friendly face and who knows what sorts of pain rays and other implements. They are designed to look friendly to inmates, according to the designers.

The machines will monitor inmates for abnormal behavior, according to the BBC. They’ll be able to detect prisoner violence and even notice attempts at suicide, which researchers say will help reduce human guards’ workload. The robots will mostly work at night, patrolling correctional facilities and helping prisoners connect with officers, according to Yonhap. They come equipped with a “remote conversation function,” via the cameras mounted on their torsos.

Three prototype guard ‘bots will spend a month in a jail in the city of Pohang. The Asian Forum for Corrections, a South Korean research group, developed the robots in concert with Kyonggi University. The project will cost about $864,000.

Robots are already a mainstay in factories, surgical bays and disaster areas, so it’s reasonable to see them in prisons, too. But what happens when the prisoners take them over?