Lost Mars Probe Briefly Phones Home, But the Window to Save the Phobos-Grunt Mission is Closing 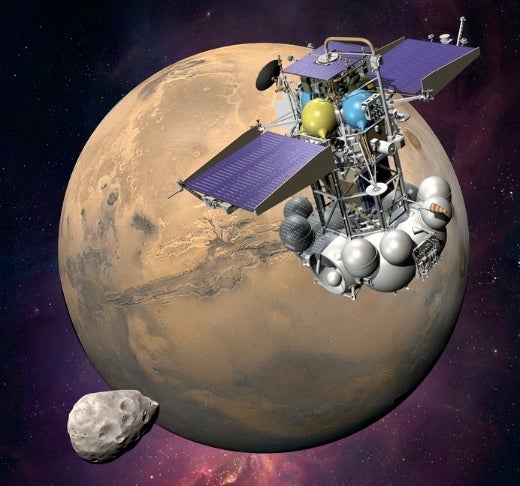 Finally, Russia’s Phobos-Grunt spacecraft has called home. The European Space Agency has confirmed that Roscosmos’ marooned spacecraft–stuck in Earth orbit after a failed booster firing failed to set it on a course for Mars earlier this month–made contact with an ESA tracking station in Perth, Australia, yesterday. But no telemetry data was exchanged in the brief contact, and the prospects for the mission are still next to hopeless.

A quick primer: Phobos-Grunt launched on November 8 from Kazakhstan’s Baikonur Cosmodrome and found Earth orbit as intended. But two booster firings were supposed to send the 29,000-pound spacecraft on a course for Mars, where it would drop off a Chinese orbiter at the Red Planet before finding its way to Mars’ moon Phobos. Neither firing happened, and the window to correct the problem and recover the mission is swiftly closing.

Still, hopes aren’t high for the troubled mission. No meaningful data was swapped the first time and there’s no telling if any telemetry data will be swapped tonight if indeed Perth can reestablish contact. If mission handlers can’t get an idea of what’s going on aboard Phobos-Grunt, they can’t fix the problem. And if the mission isn’t rescued, Phobos-Grunt will likely make an uncontrolled reentry as early as late December or January, with some parts of the spacecraft perhaps surviving and plunging all the way to Earth. Which seems to be happeninga lot lately.