As long as you aren’t related, marrying someone who looks similar to you is advantageous, says Philippe Rushton, a psychologist... 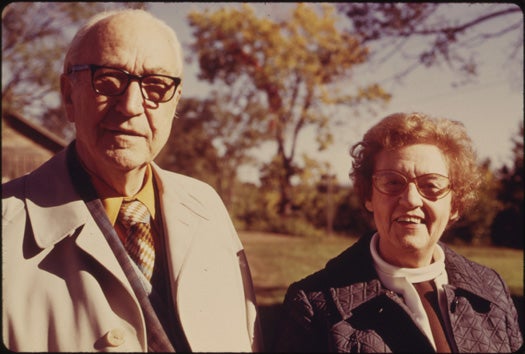 As long as you aren’t related, marrying someone who looks similar to you is advantageous, says Philippe Rushton, a psychologist at the University of Western Ontario. We use physical likeness as a way to assess underlying genetic likeness, which can cause us to be subconsciously attracted to reflections of ourselves. In evolutionary biology, the phenomenon is called “assortative mating,” or “self seeking like.” By mating with people who are genetically similar, you ensure that “your own segment of the gene pool is safely maintained and transmitted to future generations.”

Rushton and his colleagues have shown that the more heritable the physical characteristics, the higher the chance of mating between individuals with those particular traits. Height and wrist circumference, for example, are far more inheritable than waist size. “If you look at spouses across these characteristics, they are the most similar on the more genetic components,” Rushton says.

Robert Zajonc, a psychologist, found that physical likeness between couples increases over time. Through the years, couples’ wrinkles form in the same places because of a lifetime of shared emotions, he wrote in the journal Motivation and Emotion. Rushton hypothesizes instead that lookalike seniors have always looked similar and that it just becomes more obvious as they get older. As you grow old, “lots of distinguishing features drop away, like flesh on the skin or hair on the head,” Rushton says. “It’s more the bony structure of the skeleton that’s showing through.”

But what about people and their pets? Psychologist Michael Roy of Elizabethtown College studies whether or not dogs and their owners resemble each other. He has found that, indeed, purebreds do tend to mirror their owners, but not mutts. “Let’s say you’re very outgoing,” Roy says. “You would choose a dog that is likely to run up to other people, too.”