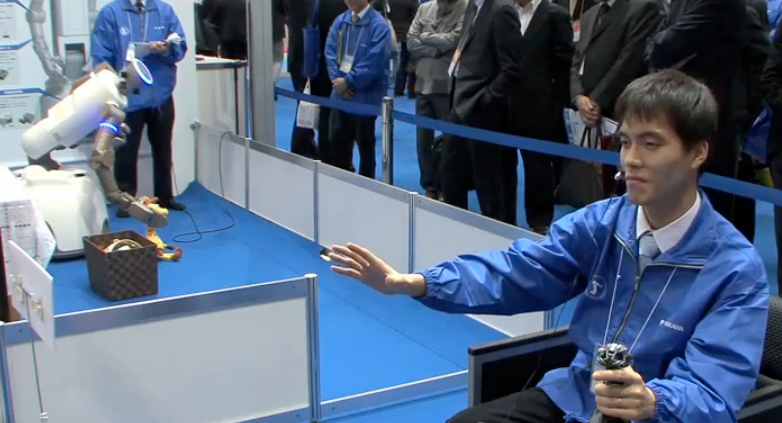 A new household servant robot made by the world’s largest manufacturer of industrial ‘bots can help people with disabilities or limited mobility move things around. It’s controlled via Kinect, with the robot aping the Kinect user’s body gestures.

Yaskawa Electric wants its SmartPal VII to live in the homes of elderly people, where it can assist with everyday clutter maintenance and a host of other tasks. It has a head-mounted 3-D camera and an infrared sensor, so it can navigate a room autonomously. It has gyro sensors so it can stay upright and orient itself, and its arms and touch-sensor-equipped hands make it safe for household use. The Kinect connection allows a distant user to control its movements.

The robot follows a Kinect user’s hand movements, but it figures out on its own how to mimic them by moving its waist, wheels and arm. It will drive to an object and bend over, then pick it up and put it in a box according to the user’s commands. The robot was demonstrated at the International Robot Expedition 2011.

Check it out below, and see if you can find the creepy-looking cardboard grandma watching over the whole thing.