Three minutes. That’s how long it will take your doctor to use the world’s smallest ultrasound device to find out... 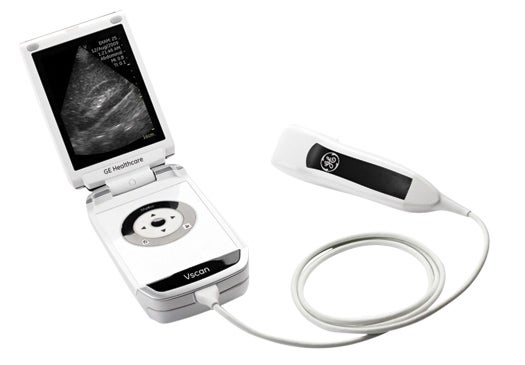 Three minutes. That’s how long it will take your doctor to use the world’s smallest ultrasound device to find out if your chest pain is caused by fluid buildup around your heart—an early sign of congestive heart failure—or if it’s just last night’s chicken vindaloo.

Due out this year, the Vscan by General Electric does everything that a conventional briefcase-size ultrasound computer can do. Glide the mini transducer wand over the patient, and it emits ultrasound waves that travel through the body. A computer measures the timing and magnitude of the return echoes and turns that data into a high-resolution 2-D image.

To squeeze that capability into a handheld box without sacrificing image quality, GE engineers had to rethink the way ultrasounds tackle data. Instead of bombarding the Vscan’s computer with nearly 100 packets of sound-wave data, explains chief product engineer Kjell Kristoffersen, integrated circuits in the wand preprocess info, adding together any overlapping echoes to reduce redundancy, and feed a single stream of manageable data to the computer.

The Vscan could save patients time and money, but it may prove even more helpful on the battlefield or in the developing world, where cheap, portable imagery could reduce the number of risky exploratory surgeries.