What Are You Working on Today, Roadrunner?

The Roadrunner supercomputer could tell you what it's doing, but then it would have to kill you. Seriously. 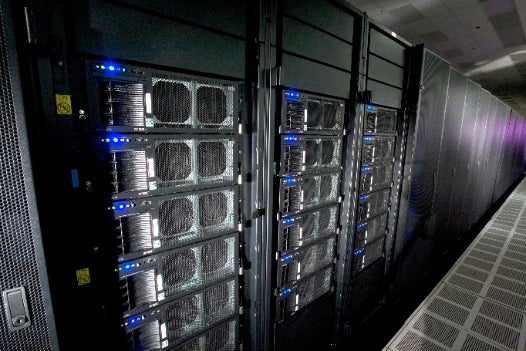 What Are You Up To?

Wouldn’t you like to know. Roadrunner belongs to the Department of Energy via Los Alamos National Lab. That means it often spends its processing time on rather ominous problems like nuclear weapons modeling and simulation to “assure the safety, security, and effectiveness of the U.S. nuclear deterrent.” In other words, Roadrunner’s work is super top-secret classified. But Roadrunner was willing to tell us–whilst glancing over both shoulders and dropping its voice slightly–that “models and simulations could include hydrodynamic mixing and turbulence of exotic materials under extreme conditions – temperatures at the core of the sun, time scales in the microseconds, and velocities of millions of miles per hour.”

Those kinds of calculations require either lots of time or lots of computing power. Roadrunner proudly supplies the latter. On a recent day (it wouldn’t tell us exactly which day), it ran 126 jobs across 512 of its 3,060 nodes. At any given time, there are 20-50 jobs lined up for Roadrunner–most of which aren’t the kind the DOE, or Roadrunner, cares to share with the larger world.