How a Fuel Cell Works

What takes place inside a fuel cell is electrolysis in reverse 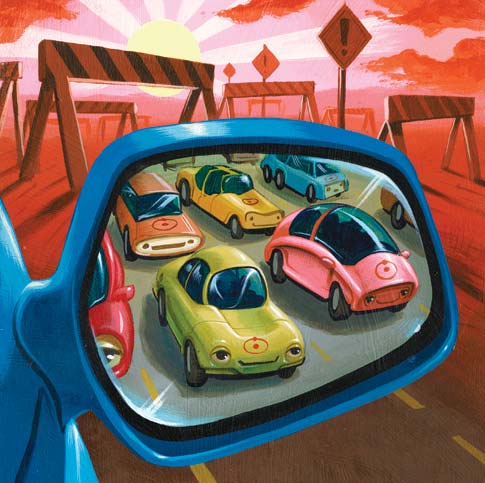 Send a jolt of electric current through water–H2O, in chemical shorthand–and each water molecule splits into its components: two parts hydrogen and one part oxygen. That process is called electrolysis.

What takes place inside a fuel cell is electrolysis in reverse: Combine hydrogen and oxygen, and you get water and electricity. The basic idea dates back to 1839, when English physicist William Robert Grove first demonstrated his “gas voltaic battery.” Grove’s experiments paved the way for the proton exchange membrane (PEM) fuel cell, which was first developed in the 1960s by General Electric to provide electric power and drinking water onboard the Gemini spacecraft. Today engineers are designing PEM fuel cells for automobiles. Here’s how they work.

Each PEM fuel cell has four primary components: an anode (negative electrode), a cathode (positive electrode), a catalyst and an electrolyte. Hydrogen gas pumped into the anode strikes the catalyst–typically a thin layer of platinum–and splits into hydrogen protons and electrons. On the opposite side of the fuel cell, oxygen enters the cathode. Sandwiched between the anode and cathode is a thin electrolyte membrane that looks like kitchen plastic wrap. It permits the positively charged protons to pass through to the cathode but blocks the negatively charged electrons–which are forced to flow through an external circuit to form an electric current. At the cathode, the electrons and hydrogen protons combine with oxygen to form water.

A single fuel cell produces only a small amount of electricity. To run something as big as a car, engineers stack hundreds of fuel cells together in a series.
A fuel cell is similar to a battery, because both convert chemical energy into electricity. A battery, however, has a fixed supply of chemicals inside it. With fuel cells, the chemicals (hydrogen and oxygen) can be added continuously, so there’s no need for recharging.

To view an animation of how a fuel cell works, visit the U.S. Department of Energy’s home page for the Hydrogen, Fuel Cells and Infrastructure Technologies Program.