Cloo Hopes to Turn Your City Into a Network of Friendly, Open Bathrooms

Running around a city trying to find a public bathroom/Starbucks/secluded alley is one of those moments that’s an urban dweller’s... 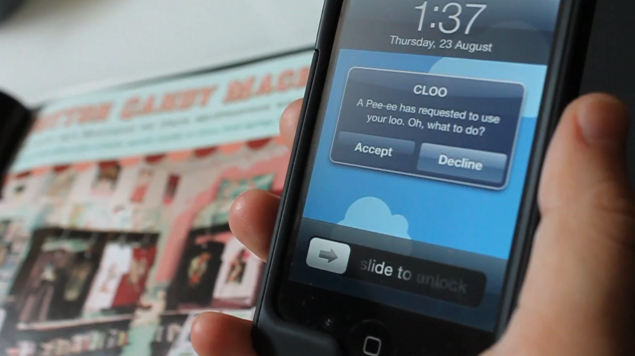 Running around a city trying to find a public bathroom/Starbucks/secluded alley is one of those moments that’s an urban dweller’s nightmare, and one that’s guaranteed to happen several dozen times in real life. (Here we should add that New York, PopSci’s hometown, is among the worst of the offenders.) Cloo (technically, “CLOO'”, but, you know, we’re not calling it that) is a new app for iOS that tries to solve that problem by connecting those in need with friends or friends of friends that are willing to supply their bathrooms–for a price.

Cloo, which very Britishly stands for Community Loo, is an app currently under development (as in, not yet available) which will show a Google Maps layer overlaid with locations of friends and friends of friends who have put their own private bathrooms, in their own homes, where they live, up for grabs. (Presumably, that “friends of friends” thing will be done through Facebook, though Cloo hasn’t made that clear.)

There are a few higher-level ideas at work, like a payment system that works kind of like that Bump app (you tap two phones together to exchange data, or, in this case, currency) and some vaguely-defined partnerships with toilet-supply companies so you don’t have to cut into your own profit to buy toilet paper or hire professional cleaners like you’ll probably want to, every week.

The app isn’t out yet, though you can follow the Cloo team’s progress on Twitter. For now, it seems like the kind of idea that one side of the userbase (the side that has to pee, or poop, or whatever, no judgments here) would absolutely love, while the other side (the side with the bathroom) would be pretty leery about. At least we can be thankful the app doesn’t have a urination-related pun as a name. (Though we would kind of love it if you guys contributed your own ideas in the comments.)