Cornell’s Ranger Robot, world record holder for the longest walk by a robot on a single charge, has smashed its... 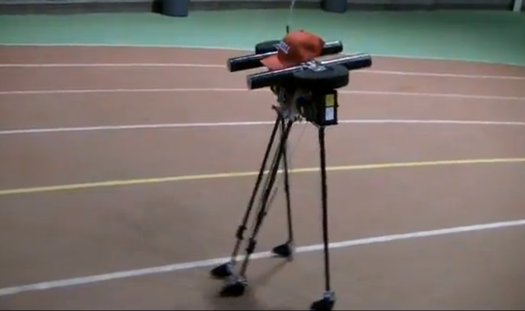 Cornell’s Ranger Robot, world record holder for the longest walk by a robot on a single charge, has smashed its own personal best by logging 40.5 miles without stopping, recharging, or even being touched. Over the course of almost 31 hours, Ranger ambled along at a not-so-blazing 1.3 miles per hour for 397.75 laps around a running track, but managed to make the whole trek using just a nickel’s worth of electricity.

The robot’s previous record, set in July of last year, was just 14.3 miles. Ranger’s handlers at Cornell were able to squeeze more mileage out of their robot by improving its efficiency through better overall control. Ranger gets by on far less power than most legged robots because, for the most part, its legs swing freely, catching the robot as it falls forward and pushing it into its next step.

So while watching Ranger go may not be the most exciting thing going in robotics right now, the waist-tall little ‘bot is something of a feat in consistency and efficiency. After all, it made 186,076 steps while covering more than 40 miles in this latest attempt, and never missed a step. That’s better than most humans can say.

Cue the Chariots of Fire and watch Ranger go in the video below. Of particular anti-climactic interest: the big finish, at the 3:40 mark.