Video: Three Hacked Kinects and One 3-D Printer Make You Into Your Own Souvenir

Remember those little wax figurines you’d get as a kid at zoos and aquariums? The ones in the shape of... 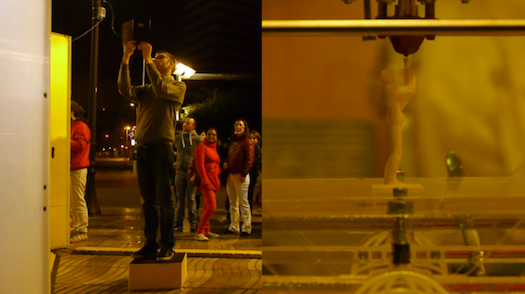 Remember those little wax figurines you’d get as a kid at zoos and aquariums? The ones in the shape of a lion or whale, stamped out of a machine, which you’d lose within a few weeks? This project, from freeform experimenters BlablabLAB, is sort of the modern version of that–with a trio of Kinect sensors and a 3-D printer in place of hot wax and whale-shaped molds. The best part: The figurine is modeled after you. Why let those dumb whales get all the glory?

Earlier this year, BlablabLAB set up a sort of interactive art installation on La Rambla, Barcelona’s iconic pedestrian street. The user stands in the structure, surrounded by three towers with hacked Kinect sensors inside. Those sensors capture a 360-degree video of the user as he or she (or they) poses. That data is then sent to a RepRap, a very low-cost, low-resolution 3-D printer, which prints out a small figurine of the user(s) in some kind of thermoplastic. Instead of a wax lion or a “Yo 3 Barca" t-shirt, the user is presented with a tiny souvenir of themselves.

The actual mechanics of the project are fairly simple, using already established equipment and software. The hardware is very cheap, and fairly easily available. Yet this is the kind of project that would have been absurdly expensive and impractical just a few years ago–imagine setting up multiple cameras and depth sensors, crafting a 3-D model of a person, and sending it off to some factory to create a mold into which liquid plastic could be poured. Now we can do it with a few hundred dollars worth of off-the-shelf (or fairly easy DIY, in the case of the RepRap) equipment.

Don’t forget to check out our rapidly growing coverage of Kinect hacks, and our essential guide to setting up the Kinect.