As Radioactive Situation Worsens in Japan, Authorities Plan to Seal Reactor With Shellac

Don’t think that just because Japan’s crippled Fukushima nuclear power plant isn’t spawning the same number of headlines it was... 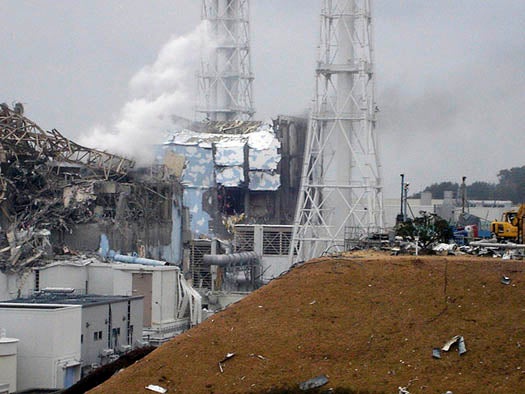 Don’t think that just because Japan’s crippled Fukushima nuclear power plant isn’t spawning the same number of headlines it was two weeks ago that things are getting any better. Desperate times call for desperate measures, and those seems to be exactly the kinds of measures Tokyo Electric is taking at its stricken facility. Kyodo News reports that starting tomorrow, a remotely controlled robot will begin hosing debris at the site with a water-soluble resin in an untested effort to keep radioactive particles in place.

In other words, Tokyo Electric Power Company (TEPCO) is going to shellac its nuclear facility grounds in an effort to make it safer for workers and ensure radioactive particles don’t catch a ride on the wind.

To quote Kyodo: Within the compound, masses of debris are strewn about the plant as a result of explosions, and this is making it very difficult for plant workers to bring the crisis under control. While frantic efforts are under way to cool reactors and remove water contaminated with high levels of radiation from facilities in the plant, the government hopes to facilitate the task by making it safe for workers to perform. The resin is designed to prevent dirt containing radioactive substances being scattered in the wind, the officials said.

On its face, it sounds like a logical enough idea if you’ve got enough resin (and it doesn’t start pouring rain). But it also sounds like a page from the very back of the playbook, suggesting TEPCO may be getting desperate to assert any kind of control over the unraveling situation at Fukushima (to be fair, the company acknowledges the shellacking is a temporary measure to contain radioactive substances).

Yesterday a former GE safety expert who was employed when the reactors were installed in the ’70s said he believes Japan has “lost the race” to prevent meltdown and that it appears at least one reactor core had melted through it’s containment vessel and hit the concrete floor below. That’s extremely not good. Though we’re not facing a Chernobyl-esque explosion and plume, rest assured (if you weren’t already) the environmental situation in Japan is going to get worse before it gets better.