Watch A Professor Control Another Professor’s Mind From Across Campus

The first human brain-to-brain interfacing has been used to play a video game. 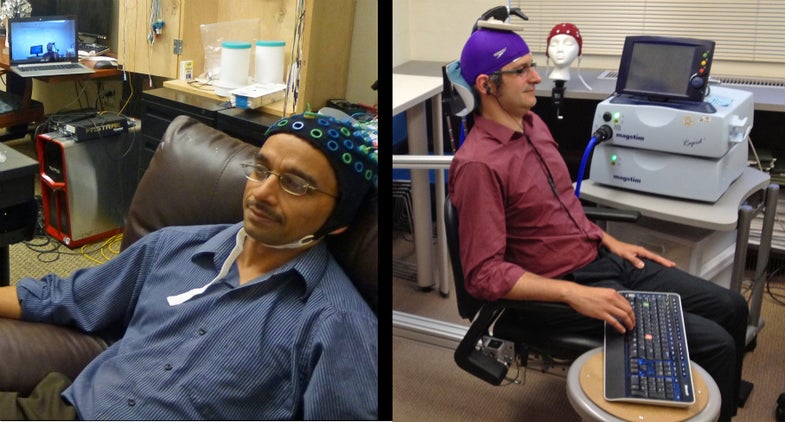 Previous work has allowed basic communication between two brains, but this is the first time it’s been shown in two humans. In February, a Duke University team managed to link the brains of two rats, one in North Carolina and one in Brazil, to solve basic puzzles together. Then, earlier this summer, Harvard University researchers demonstrated a brain-to-brain interface between a human and a rat, allowing a man to control the rat’s tail with his mind.

Here, Rajesh Rao, a UW computer science and engineering professor, used his thoughts to control the actions of Andrea Stucco, a research assistant professor in the school’s psychology department. Rao wore an EEG cap that read his brain’s electrical activity, while Stucco had a transcranial magnetic stimulation coil, which can stimulate brain activity, placed over his left motor cortex, the region of the brain that controls hand movement. A code translated brain signals from the EEG into commands for the brain.

Rao imagined moving his right hand (without actually moving it) to click the “fire” button that would shoot a cannon in a video game. Across campus, Stucco, who wasn’t looking at the computer screen in his lab where the video game was unfolding, involuntarily moved his right hand and pushed the space bar on his keyboard to fire the cannon, as if experiencing a nervous tic.

“This was basically a one-way flow of information from my brain to his,” Rao said. “The next step is having a more equitable two-way conversation directly between the two brains.”

One day, the researchers would like to develop technology that could allow a person who can’t speak to communicate their needs, for instance. But a true mind meld is still the work of science fiction. It can only interpret very simple brain signals, and this experiment occurred under ideal conditions with equipment that no one wants to strap on outside the lab. And no, you can’t control someone’s body against their will, Rao says. But maybe one day?