The method could illuminate how nanostructures work 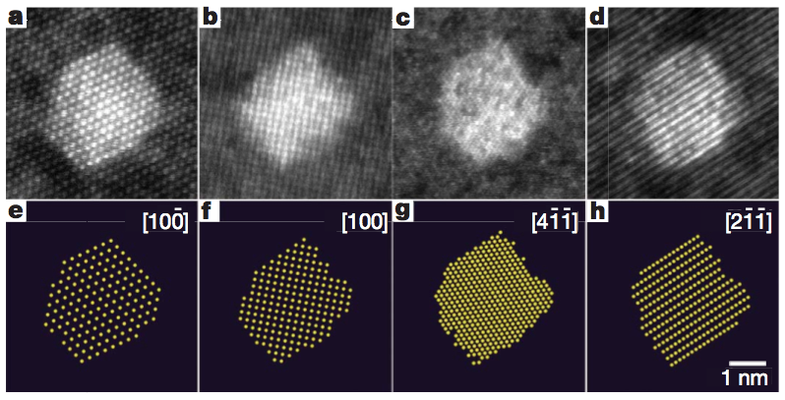 Nanoparticles are known for their strange and unexpected properties, like providing bendable ceramics, switchable magnetization and so on. To figure out why these things happen, it would be useful to see how the structures are built, but it’s hard to take a picture of a thinly stretched clump of atoms.

Now a group of researchers in Europe have figured out a way to do it, and translate those pictures into colorful 3-D graphics that allow them to count individual atoms and see how they’re arranged.

To take their nanopictures, Marta Rossell of ETH Zurich and Rolf Erni of the Swiss Federal Laboratories for Materials Science and Technology (EMPA) used a special electron microscope at Lawrence Berkeley National Laboratory. The machine has a resolution greater than the diameter of a single atom, allowing the researchers to zoom in on the nanoparticles’ atomic structures with great clarity.

They used silver nanoparticles in an aluminum matrix and tilted them under the electron beam to capture images. Then, Sandra Van Aert from the University of Antwerp built models based on those images, sharpening their resolution. Then Dutch tomography scientist Joost Batenburg used algorithms to reconstruct the silver nanoparticle in 3-D, detailing how all its 784 atoms were arranged.

“Up until now, only the rough outlines of nanoparticles could be illustrated using many images from different perspectives,” Rossell explains in an EMPA news release.

This sort of nanoparticle characterization could help determine which atomic configurations are best suited to various applications, like medical devices, drug transport systems and more. It could even illuminate how to use nanoparticles to mimic viruses or deliver vaccines. Incidentally, two separate teams announced breakthroughs on both those fronts today.

Emory University researchers announced Wednesday they had built tiny nanoparticles that resemble viruses in size and composition, and which induce lifelong immunity in mice. The particles are made of biodegradable polymers and activate two different parts of the innate immune system, the researchers say. They could be used with material from many different bacteria or viruses, a potential breakthrough for vaccine delivery.

Also in nanovax news, MIT researchers said Wednesday they had developed a new nanoparticle that can deliver safe vaccines for diseases like HIV and malaria. The particles, which are fatty spheres, can carry synthetic versions of virus proteins that elicit a strong immune response, according to MIT News.

Now that there’s a method to take their pictures, scientists may be able to learn even more about how nanoparticles function at the atomic scale.