NASA Looks Into Laser-Propelled Rockets As a Safer, Cheaper, and More Efficient Way to Space

Launching payloads into space is expensive, but high costs aside it’s also a horribly inefficient process. Conventional rockets are almost... 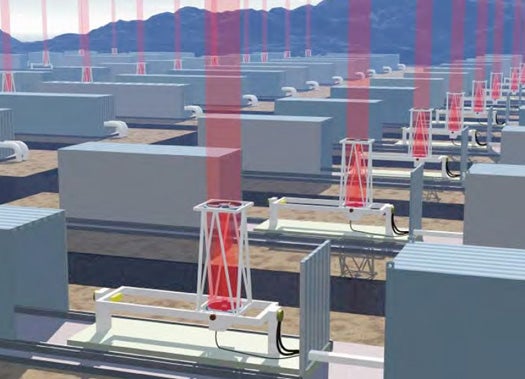 Launching payloads into space is expensive, but high costs aside it’s also a horribly inefficient process. Conventional rockets are almost pure fuel, leaving only a small percentage (usually in the low single digits) of a launch vehicle’s total weight available for payload. So NASA’s Glenn Research Center in Ohio is looking into a whole new system of payload propulsion that uses lasers or microwaves to launch vehicles into orbit.

Doing so could significantly reduce the costs and physical dangers associated with regular spaceflight. Rockets, as we noted earlier, are more or less massive controlled hydrocarbon explosions–bottled up fuel that (if all goes well) ignites in stages to hurl the rocket skyward. The new technology would use ground-based lasers or microwaves to target a heat exchanger aboard a rocket, coaxing increased energy output from the fuel.

This heat exchanger causes the temperature of the fuel aboard the rocket to spike, pushing it to something like 3,100 degrees, a temperature that drastically increases the rocket’s thrust. But it’s not incendiary like a conventional rocket, so it emits only hydrogen. Also, it can’t explode as towering tanks of bottled up rocket fuel are wont do.

The drawback: the technology is really optimized for small payloads weighing in the neighborhood of 200 pounds. But it would also be able to cheaply launch several rockets daily, so it could carry larger objects into orbit piecemeal for assembly later. The small-payload scheme also fits nicely with the increasing proliferation of micro- and nano-satellites.