NASA Is Putting This Can In A Million-Pound Crusher To test future rocket designs, NASA is employing an age-old bar trick: Slowly and deliberately apply pressure to an aluminum can until it crumples. No foreheads will be involved, however.

In late March, engineers will use a million pounds of force to crush a 27.5-foot diameter, 20-foot-tall canister made of aluminum and lithium, hoping to learn more about shell buckling so they can design sturdier rocket skins.

Cylinder buckling is governed by imperfections in a structure and uncertainties in the loading of weight, and mathematical models can predict this behavior. But the current models, known as shell buckling knockdown factors, date to the Apollo era, well before the advent of modern composite materials and advanced computer modeling.

New materials are sturdier and lighter than the stuff used in the 1960s, but there have not been new tests to come up with new equations that can predict how a material will deform and buckle under the weight of a payload or lots of fuel. That’s the goal of the upcoming can-crushing test at NASA’s Marshall Space Flight Center in Alabama.

NASA has already performed small-scale tests using 8-foot-diameter cylinders, but the big can will run the gauntlet: It will be sandwiched between two massive loading rings that will press down with almost one million pounds of force, causing it to buckle.

Engineers have placed hundreds of sensors on the can, which has also been outfitted with a polka-dot pattern that will allow engineers to precisely measure its deformations. They will use a technique called photogrammetry, which determines geometric shapes from images, according to a NASA news release.

Fuel tanks and other spacecraft materials are designed to be as thin as possible to save as much weight as possible, but spindly materials could buckle more easily if they’re topped with a heavy space capsule or other payload. Engineers hope the can-crushing tests will prove the strength of thin materials, enabling rocket builders to design lightweight materials for future heavy-lift launch vehicles. 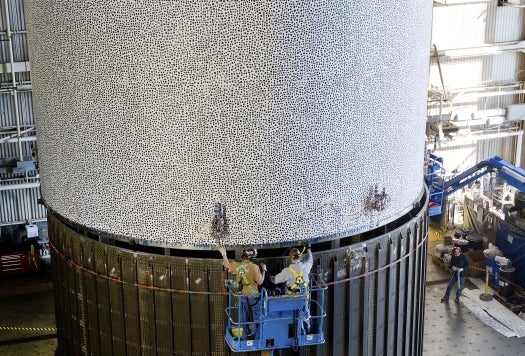 The 27.5-foot diameter, 20-foot-tall test can was moved into the test lab at Marshall Space Flight Center in preparation for a March smackdown.