The slick touchscreens of our iPhones and Droids are visually magnificent and the epitome of tech chic, but their slick,... 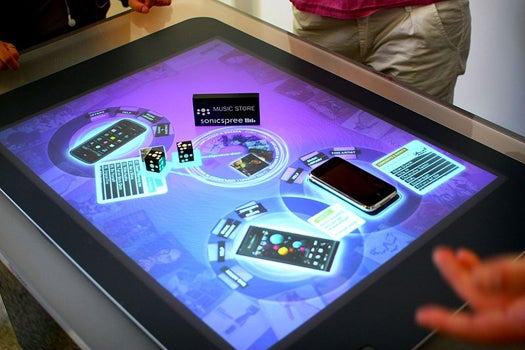 A new patent filing by Microsoft could lend a tactile quality to the company's touchscreen tech. Ergonomidesign via Wikimedia
SHARE

The slick touchscreens of our iPhones and Droids are visually magnificent and the epitome of tech chic, but their slick, untextured glass screens don’t resonate with humans’ tactile nature (that’s why some people just can’t kick the hardware button keyboard). Good tactile touchscreens – screens that impart a feeling of touch or texture in sync with a displayed image – have thus far eluded device makers. A new Microsoft project could change all that.

Previous attempts at tactile screens have focused largely on so-called vibrotactile displays that use small voltages at different frequencies to create the illusion of texture, but Microsoft wants to offer the real deal. The tech giant’s patent calls for pixel-sized plastic cells that can be physically manipulated to create the ridges and bumps that create a realistic touch sensation.

According to the patent filing, the technology is aimed at large displays like Microsoft’s table-sized Surface display rather than portable touchscreens – for the time being, anyhow. Surface works via a projector that beams images onto the tabletop screen from below. Users’ fingers touching the other side of the screen generate infrared reflections that are picked up by sensors below, creating touchscreen capability.

Microsoft’s patent envisions augmenting this with a shape-memory polymer that responds to light commands; when certain wavelengths of UV light hit pixels they respond accordingly, becoming harder, or softer, or protruding or retracting. Syncing this up with visual information could create the kinds of ridges and bumps that could five an image texture, or simulate the feeling of pressing real buttons rather than relying on the flat touchscreen tap iPhone users are familiar with.

Don’t put it on your Christmas list – this technology is nascent to say the very least, and Microsoft is mum on its development plans or if/when a tactile product might come to market. But the fact that a big player like Microsoft is pushing beyond vibrotactile displays is promising for the field in general. If researchers there can make it work, texting on touchscreens might never be the same.