Video: Largest Rocket Lifts Largest Satellite Ever Into Space, Where It Will Spy on US Enemies

A behemoth spy satellite blasted into space Sunday night aboard the country’s biggest heavy-lift rocket, the second satellite launched by... 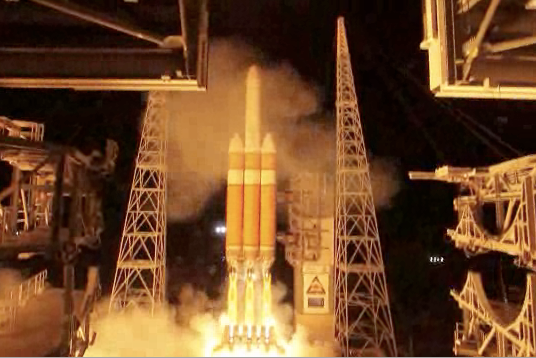 A behemoth spy satellite blasted into space Sunday night aboard the country’s biggest heavy-lift rocket, the second satellite launched by by the National Reconnaissance Office in the past three months. Stats on the megasat are classified, but the NRO boasted this fall that it would be the biggest satellite in the world.

Government officials won’t confirm what the satellite is for, but NROL-32’s huge antenna would make it possible to eavesdrop on enemy communications, as the BBC says. Satellite watchers believe it hosts sensitive radio receivers and an antenna spanning 328 feet across, nearly five times the size of the largest commercial antenna ever launched.

“This mission helps to ensure that vital NRO resources will continue to bolster our national defense,” said Air Force Brig. Gen. Ed Wilson, commander 45th Space Wing, after the launch. It had been delayed two days because of a temperature sensor glitch.

United Launch Alliance, a partnership between Boeing and Lockheed Martin, launched the satellite aboard a Delta IV Heavy rocket. It was only the fourth launch for the Heavy since its 2004 debut, which launched a small demonstration satellite. It involves three boosters that provide 2 million pounds of thrust to send 13-ton payloads to geostationary orbit. The other two satellites were also secret spy payloads.

Last week, Boeing announced the successful launch of SkyTerra 1, which has a 72-foot-wide antenna reflector, the largest on a commercial satellite. The previous record was TerraStar-1’s 60-foot antenna.

Specs on the country’s military and spy satellites are classified, but NRO director Bruce Carlson, a retired Air Force general, said at a conference in September that NROL-32 would be the biggest satellite in the world.

He added that the current plan for NRO satellite missions “is the most aggressive launch campaign that the National Reconnaissance Office has had in 20 years, almost a quarter of a century,” according to Space.com.

Satellite watchers told SpaceFlightNow and NASAspaceflight blogs they believe the payload is an electronic signals intelligence satellite; there are four already in orbit. ELINT satellites known as Mentor or Advanced Orion have been in service since 1995.