Microscopic Worms Could Sniff Out Explosives

Bomb squads have long used metal detectors, X-ray machines and dogs to uncover threats. Without them, authorities may not have... 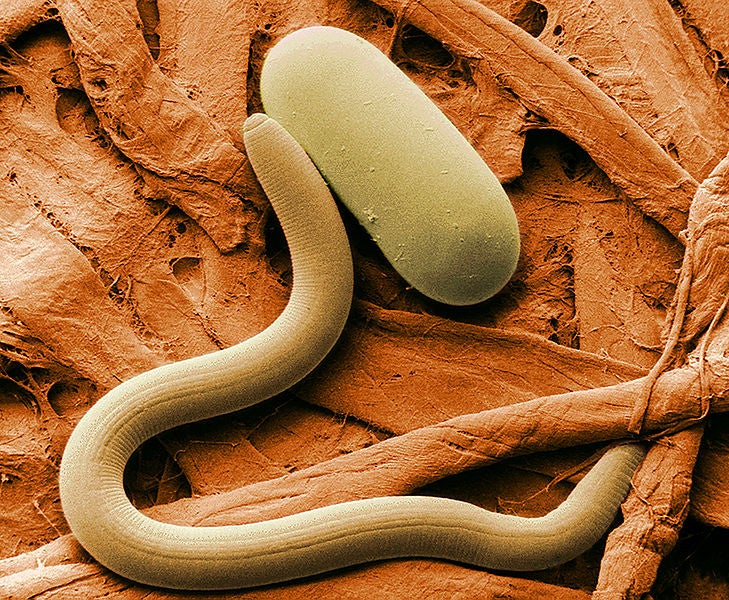 Bomb squads have long used metal detectors, X-ray machines and dogs to uncover threats. Without them, authorities may not have intercepted some of the thirteen homemade explosives that froze Greece’s outgoing mail earlier this week. But soon they may find a new tool in their quest to find the bad guys and their bombs: microscopic worms.

In a paper published last month, researchers at Australia’s Commonwealth Scientific and Industrial Research Organization described the effectiveness of Caenorhabditis elegans, a millimeter long, mud-loving nematode, in detecting chemicals associated with explosives. If they’re right, bomb detection could get cheaper and easier. But not everyone is convinced that they are.

Nematodes aren’t the first organism investigated for their keen sense of smell. Dogs, rats, pigs, cows, insects, bacteria and even plants and have been used to find all kinds of explosives. So far, nothing has worked as well as the trusty canine snout.

But according to Dr. Stephen Trowell, the team’s leader, a machine that uses his worms could surpass all these in sensitivity. “All signs are that it’s as good as it gets,” he said.

The nematodes smell chemicals like nitroglyceride and cyclohexanone — both found in the air around homemade C4 explosives — through tiny scent organs on the sides of their mouths called amphids. Each amphid has twelve different kinds of receptors that relay signals to the brain.

Trowell thinks he can extract these receptors from the nematode and incorporate them into a portable testing device, removing the organism from the process entirely. To do so, they will have to couple the receptors to an electric signal, so their response would be readable by the machine. The specifics of the apparatus are still under wraps; Trowell wouldn’t give any details until their paper describing the mechanics was published.

So should bad guys really be worried? Glen Rains doesn’t think so. “There’s always talk about doing this electronically eventually,” said Rains, a biological and agricultural engineer at the University of Georgia in Athens, who has been working on training wasps to detect everything from explosives to crop disease. But, he said, the mechanization of these odor responses “will be further down the road than some people realize.”

One of the roadblocks Trowell and his team might encounter is that the proteins they extract have to still work outside of the worm. That’s not always the case, said Jeffrey Tomberlin, an entomologist at Texas A&M in College Station, who trains flies to detect odors, worries that proteins removed from the worm might stop sniffing all together. By taking the components out, he said, “you could lose the true essence of the response.”

The nematodes’ sense of smell is not only highly sensitive, but also specific — they can’t detect everything. In Trowell’s study, published in PLoS ONE in early September, they only responded to compounds associated with homemade and commercial explosives, and not high-end military bombs. Still, Trowell said, “many of the things that are available to people with bad intentions, we can detect.”

Despite skepticism from others in his field, Trowell’s lab has found no shortage of interest. The Australian Department of Defense recently gave the lab a grant to build a prototype of their bomb-sniffing machine, and the team filed for a patent on similar technology in January. It remains to be seen, however, if their device actually works.

In the meantime, Trowell isn’t limiting himself, or his worms, to bombs. His team is already using the nematodes to detect food and wine quality, and he hopes to use the worms to sniff out diseases by analyzing someone’s breath. While the technology might not be there yet, Trowell isn’t the only one excited about biological noses. Tomberlin agreed that when it comes to the potential applications, “the only limitation is our imagination.”