Remember Recorded Future, the future-predicting information analysis company that made a splash earlier this year when it scored investments from... 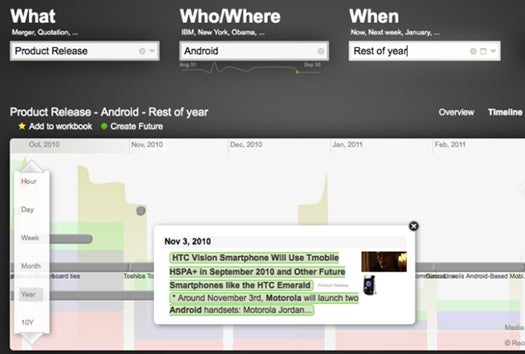 Remember Recorded Future, the future-predicting information analysis company that made a splash earlier this year when it scored investments from both Google and the CIA? The company has recently revealed a bit more about how its technology works and just how well the firm has done recording events before they happen. And, presumably, how well it will continue to do in coming days.

Speaking to Technology Review, company founder Christopher Ahlberg described how its software goes deeper than search engines like Google that simply rank the relevance of results by links. Rather, it analyzes the more nuanced, invisible connections between events and people that shape the future. Doing so, he says, lets Recorded Future look for patterns that suggest certain outcomes, like when a product might release or when a company might clear a patent hurdle or offer an IPO.

Recorded Future’s software does this semantically, using linguistic tools that identify certain types of events and the sentiment conveyed in the wording. It aims for articles with some degree of established veracity, like government filings, news articles, and speeches by leaders or heads of industry, but the software also scans Twitter updates and other measures of general feeling or sentiment surrounding an event, person, company, or product.

In other words, it’s less a matter of Recorded Future wagering an educated guess about a future event and more like an aggregation of predictions that have already been made. That aggregate collated prediction about the future is influenced by all the factors listed above and gives, say, a stock analyst a reasonable measure of when an event is likely to happen.

Right now Recorded Future has fewer than 100 clients paying to use its tools, but those that are using them aren’t lightweights – Ahlberg tells TR a mix of government analysts and financial firms are taking advantage of the insight the company offers. Those are players whose decisions are tied to serious stakes in both security and finance, lending Recorded Future an air of serious credibility. Indeed, studies of its past performance have shown its models tended show increased strength of activity around an event or entity that correlated to real time market activity.