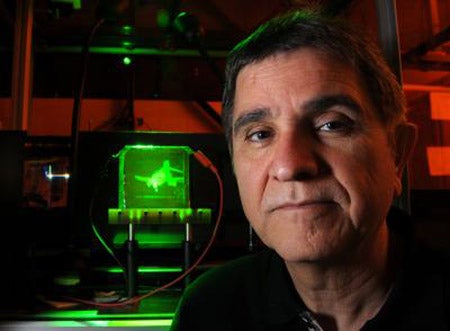 Videochat is cool enough, but it’s got nothing on R2D2’s 3-D holographic projector (think Princess Leia repeating “Help me Obi-wan Kenobi; you’re my only hope”). Now, a team at the University of Arizona College of Optical Sciences is brining holographic telepresence closer to reality with a new 3-D holographic imaging technology that can record and project a three-dimensional, moving image in real-time without the need for any special eyewear.

Holographic projection tech has been capable of projections static images for awhile now, but the ability to create moving, updating images that essentially function like holographic video has eluded researchers until now. That dynamic updating capability means, ostensibly, that holographic telepresence could be recorded in one location and projected anywhere in the world, live.

The technology isn’t quite to that point yet, but it’s getting much closer. The prototype device developed at U. of Arizona uses a 10-inch screen constructed of a novel photorefractive material that can refresh a hologram every two seconds. That’s not real-time, but it’s a remarkable improvement on a technology that was previously static. And naturally it’s getting better all the time. The team has already successfully tested a 17-inch screen, and the next logical step will be to increase the refresh rate.

Rather than relying on processor intensive computer-generated holograms, the tech uses an array of regular cameras to capture a person or object in 3-D and then encodes that data into a fast-pulse laser, which interferes with a second laser beam to create an interference pattern. That pattern is written into the polymer to create the image. Each pulse of laser records a “hogel,” or holographic 3-D pixel. That hogel data can be beamed elsewhere and reconstructed into a holographic image remotely.

It’s not hard to imagine the various telepresence applications of such technology. Aside from the obvious ability to conduct presentations or lectures remotely via hologram, it could drastically change distance learning for hands-on procedures like surgery. And who knows? In a pinch it might just help you put out an interplanetary S.O.S.