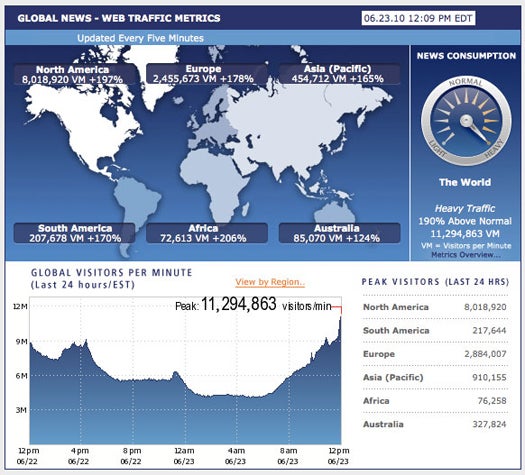 Web traffic spiked at news sites across the Web after the last-minute U.S. victory over Algeria in the World Cup. Traffic averaged 190% higher than usual, with Africa leading the way. Mashable
SHARE

Just how breathtakingly, heart-stoppingly awesome was Landon Donovan’s 91st-minute goal in today’s win-or-go-home U.S.-Algeria World Cup game? It was definitely significant enough to temporarily overwhelm Twitter. And it just might have been the single biggest driver of Internet traffic ever.

Over at Mashable the editors were monitoring new traffic across the Web via Akamai’s Net Usage Index, a traffic meter that keeps real time tabs on how many visitors per minute are landing on more than 100 major news sites. In the minutes after Donovan’s game-clinching, elimination-defying goal during added stoppage time, Web traffic spiked to 11.2 million visitors per minute, eclipsing even the 2008 U.S. presidential election as measured by the viewers per minute metric.

Of course, Donovan can’t take all the credit. Elsewhere in South Africa England and Slovenia were wrapping up a similarly tense match, and all that breaking news hitting the wire at once likely contributed to the spike, which reportedly threw Yahoo Sports out of sorts for several minutes and also caused some Twitter issues (what doesn’t these days?).

The all-time news traffic record was set on the first day of World Cup play at 12 million visitors per minute, but apparently Akamai’s final numbers aren’t in yet on today’s action. That means today’s post-game spike could be the biggest ever or it could remain the second biggest traffic uptick in history. But it also means that as the World Cup moves into more and more meaningful games, we may see the record eclipsed again and again. Somebody better tell the IT guys over Yahoo to cancel their weekend plans.