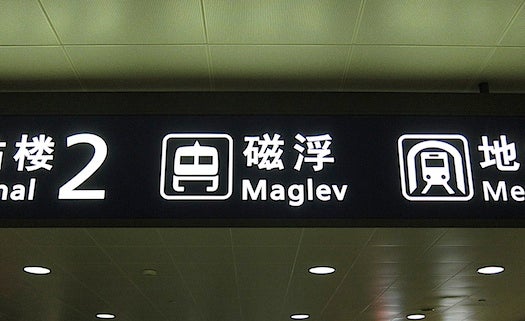 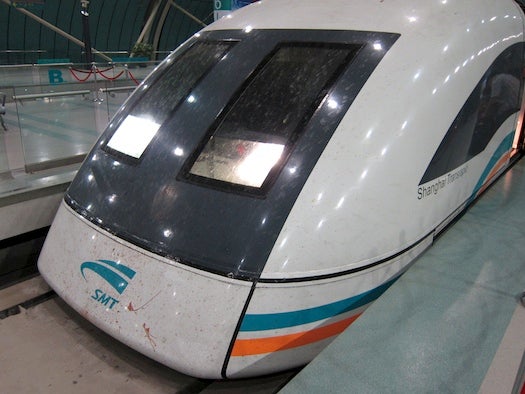 It may have been an unglamorous 15 hours from JFK to Shanghai in coach, but once on the ground, my transportation prospects improved significantly: I floated into the city levitating on a magnetic field at 160 mph.

The train that connects Shanghai’s Pudong International airport with the outskirts of its regular metro line was the first high-speed Maglev train to operate commercially in 2004. Not many have followed since, and that’s a shame, because the ride is smooth, fast and nearly silent (although I may actually prefer the fighter-jet hum of a nice Japanese shinkansen).

What’s also a shame is that the ride only lasts eight minutes, and only skips 10 stations on the Metro’s #2 line before plopping you at Longyang Rd. station–still on the eastern fringe of the city. From there you must hop the traditional underground Metro and its humdrum, ancient wheel-and-track drivetrain for access to central Shanghai. Boo. But the speed! Eight minutes to cover 16 miles is not bad at all. The train can top out at 268 mph on the ride, but mine only made it to 160 mph.

The smooth ride certainly aides in the jet decompression process–a process I’m now finalizing at the time of writing with a few beers and some dumplings before hitting the World Expo tomorrow. Until then!

By the way, you may have noticed some gnarliness on the nosecone in the top photo. All I have to say is I’d hate to be the bird/squirrel/whatever that met its fate being introduced to a Maglev train’s face at 160 mph: 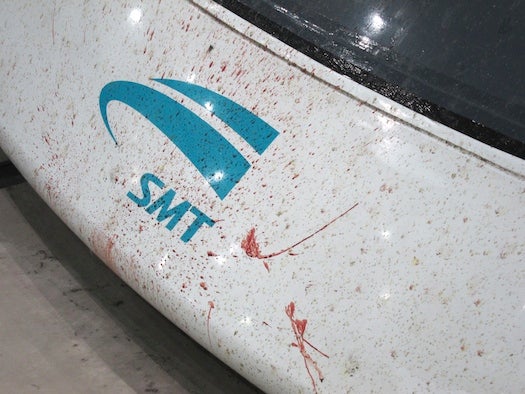