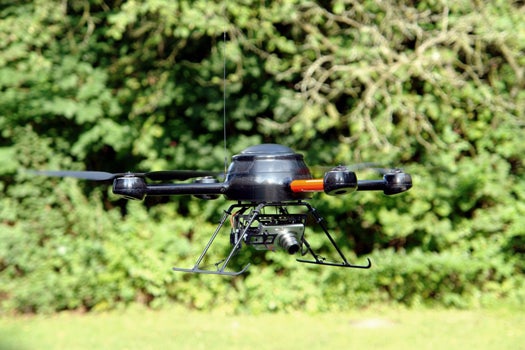 Members of the British law enforcement community who think UAVs should be used to help stop crimes just got some new evidence to back up their argument, courtesy of the Merseyside PD. Yesterday, the Merseyside Police announced the first ever arrest assisted by a UAV, in this case a quad-rotor chopper-bot that helped track down a car thief.

The Merseyside police deployed the UAV, which they nicknamed the flying saucepan, after a car thief ditched his getaway ride to hide in some bushes. Using the thermal imaging power of the UAV, the bobbies managed to track the 16-year-old perp through the underbrush, and eventually find his hiding spot.

The UAVs used by the English cops are similar to the UAV used by the Scottish rugby team, cost $62,000 a pop, can are remotely controlled from as far away as 500 yards.

To watch the Merseyside PD operate their UAV (although not catch anyone), check out the video below: