It’s the saving grace of every slow news day: you flip on the cable news networks during the mid-day reporting... 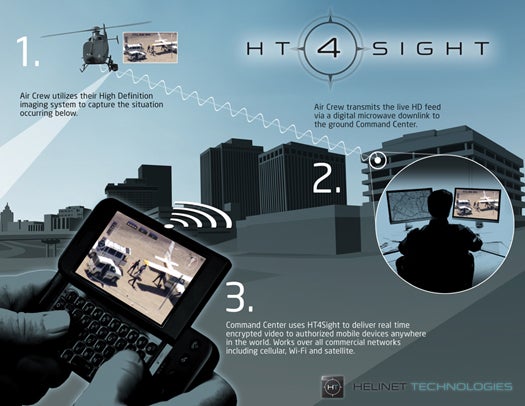 It’s the saving grace of every slow news day: you flip on the cable news networks during the mid-day reporting lull to find live video from news choppers tailing a perp as he tries to out-maneuver local law enforcement. But the privileged vantage point that allows you to see said perp ditch his ride and leap the fence behind an apartment complex is not shared by the cops on the ground. A new mobile technology called HT 4Sight aims to change that, bringing live encrypted video feeds from aerial platforms straight to hand-held devices on the ground.

Created by aerial charter company Helinet — you may have seen some of the aerial footage the company shot for Planet Earth — the technology doesn’t require much in the way of add-ons; a software client installed on the phone allows it to receive real-time video feeds directly from an airborne crew packing a gyro-stabilized HD video camera system. The camera can be controlled manually or programmed to lock onto a specific set of coordinates.

The live feed is compressed from 1.5 gigabytes per second to 18.3 megabits per second for microwave relay to a ground station up to 120 miles away, where it is de-compressed back into 1.5-gbps HD video. The ground station then relays the encrypted video to smartphones or other video enabled devices anywhere in the world, where the device down-converts from HD to standard-def and cropped for easier viewing on the phone’s screen.

The downlink causes a mere 100-millisecond delay, close enough to real time that relevant authorities can use the feeds to augment high-security situations, monitor pursuits or simply get the lay of the land in unfamiliar territory. Devices can view the video feeds over cellular or Wi-Fi networks, and a single device can receive up to four feeds at once, compounding the degree of situational awareness the program can introduce to a situation.

Right now it’s available for Windows Mobile and Blackberry devices, but it’s easy to picture this technology working on any platform and for myriad purposes. The military/drone applications for such real time aerial footage beamed directly to the field are obvious. But we’re more thrilled with the idea of streaming other kinds of video live through simultaneous streams. Like March Madness. In quad split-screen. On the iPad. Please?