A glimpse of the post-silicon age; how does Graphene Valley sound to you? 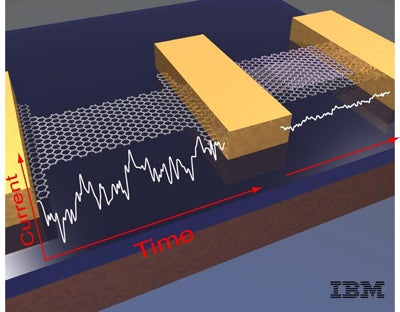 Silicon Valley may want to update its name, because IBM has created graphene transistors that blow away the silicon competition. The transistor prototypes were made from sheets of carbon just one atom thick that could switch on and off at 100 billion times per second. The 100-gigahertz speed is about 10 times faster than any silicon equivalents, Technology Review reports.

The transistor creation is supposedly compatible with existing semiconductor manufacturing, and so experts anticipate a scaling-up process that could put transistors into high-performance imaging devices, radar and communication gadgets within the next few years. Graphene-based computer processors might take another decade at least.

Graphene is one of the likeliest materials to replace silicon in computer processing, because electrons travel through graphene much faster. But researchers had previously made graphene transistors via time-consuming methods, such as flaking off graphene sheets from graphite.

By contrast, IBM grew its graphene transistors on a silicon-carbide wafer, and then added an insulating layer which prevents short circuits in the transistors. Their work was supported by DARPA, the Pentagon’s research arm for all things mad science.

Other materials, such as bismuth telluride, may eventually usher in the quantum computing age even further beyond silicon, but most of us won’t sport quantum computers on our desktops within the foreseeable future. So don’t be too disappointed with your blazing-fast graphene-based computers.