A Faster Yacht, Trading Sails For a Wing 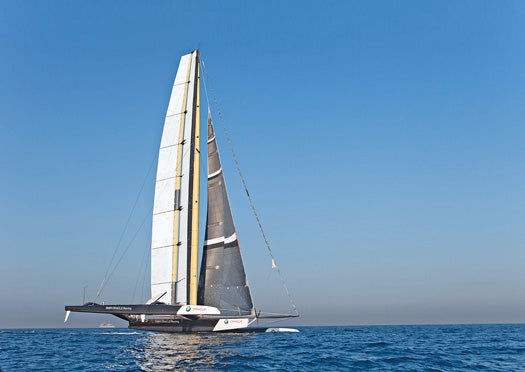 This year, the rules have all but disappeared for competitors in the world’s oldest international trophy competition, the America’s Cup sailing race. Motorized sails are fine, the single-hull rule is out, and in the case of the BMW Oracle Racing team’s boat, even sails are optional. Instead, the largest wing ever constructed could catch enough wind to make the yacht the fastest yet.

Conventional fabric sails are unreliable. “Wind speed and direction change by the second,” says Mike Drummond, the design director for the BMW Oracle Racing team. “The crew must constantly maneuver the mainsail to maintain maximum speed.” A sail’s leading edge often ripples, particularly when tacking into the wind, increasing drag and causing the sail to lose the airfoil shape that helps propel the boat. In contrast, it takes just one sailor a few clicks on a computer to immediately swing the 190-foot-tall carbon-fiber-and-Kevlar wing into position, where it will hold its shape regardless of conditions. With the wing, Drummond says the 90-foot trimaran can sail up to 5 percent, or about one knot, faster.

In the months leading up to the February 8 race day, Drummond’s team noticed a few drawbacks to the new design. In strong winds, where sailors would normally shrink a soft sail, the one-size wing can grab too much wind and destabilize the boat. And in choppy waters, the extra weight can cause the craft to pitch front to back. “Still, overall, it’s obvious that the boat goes faster,” Drummond says. “We used to measure performance gains in hundredths of a knot. Now we measure it in tenths of a knot or more.”

The 7,700-pound wing includes a single piece that rotates around the mast and eight flaps that catch or shed wind in different directions for thrust. Engineers claim that the wing—80 percent longer than a Boeing 747’s—can achieve twice the power of a soft mainsail.

Fiber-optic sensors in the mast and hull reflect light differently when stretched. A computer converts these changes into stress loads in real time to predict material failures and alert the crew if strong winds could snap the mast.

A camera system photographs the soft sail, analyzes its shape and height, and compares the measurements with past performance data to suggest the optimal setup.