Researchers at the Fraunhofer Institute have a plan to convert smart phones into controllers that analyze other devices’ power usage,... 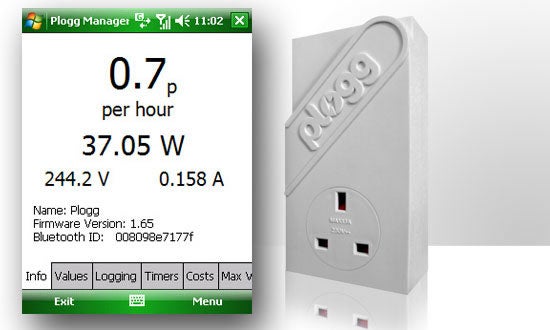 Researchers at the Fraunhofer Institute have a plan to convert smart phones into controllers that analyze other devices’ power usage, and even switch them on and off. The technology will make phone cameras into a “magic lens” for visualising the power consumption of coffee makers and gaming consoles alike.

But this doesn’t mean that you can just load an app into your phone and run around checking for vampire power. Each household device will require a “power plogg” that fits between the plug and outlet. The plogg normally reports power consumption to a computer via radio signal, but a smart phone with the right app can also display the info.

The app will store pictures of each device, taken from a number of different angles. That serves as a crude substitute for an image recognition algorithm — a phone in “magic lens” mode would send a camera picture of a given device to the app server, which would then compare that with stored images. Recognition would allow the app to finally report back the appropriate power consumption from the related power plogg.

Researchers at the Fraunhofer Institute for Applied Information Technology FIT in Sankt Augustin, Germany demoed the program at the GSMA Mobile World Congress in Barcelona, Spain. They hope to roll it out soon and realize a future where people switch on their washing machines with their phones — just as long as those phones aren’t still sitting in some pants pocket.

We definitely look forward to all the household experiments that could be done, such as comparing energy-saving bulbs with conventional light bulbs over a long period. But perhaps the Fraunhofer researchers should first talk to Google about getting some really killer image-recognition algorithms that could make the “magic lens” all that much more efficient at recognizing our appliances.