The U.S. ranks 17th worldwide in broadband access, but not for long—last year’s stimulus package allotted $7.2 billion for upgrading our underperforming broadband infrastructure. Our legacy copper wiring just can’t carry the data to support HD-video streaming, for instance, and next-gen wireless networks are slower to roll out than in, say, Japan, because of the sheer size of this country. But advances in fiber-optic cables and broadband blimps could bring serious speed increases to homes and smartphones.

Our next generation of transoceanic submarine fiber cables may be built according to the Alcatel-Lucent design that recently set transmission speed records by moving data 10 times as fast as current cables. The new cables started with a fiber core that is on average 40 percent thicker than the ones currently draped across the ocean floor. Engineers designed an array of 155 lasers that emit light of different wavelengths, and in addition to encoding information in the timing of the light pulses the way current cables do, they modulated the polarization and the phase to pack extra data onto each light wave. The new fiber cables can send 15.5 terabytes—the equivalent of 400 DVDs—each second from Boston to Bilbao.

Task: Float broadband blimps above areas that are a headache to hardwire
Status: Delivery of a first ship to a military contractor this year; full platforms in 3–5 years

We’re going to need to dig a lot more fiber and copper in the coming years to meet the exploding communications demand. Or we can just float a few blimps. Sanswire, a manufacturer of unmanned aerial vehicles, is working on a 525-foot helium- and fuel-gas-filled airship, the Stratellite, which would provide blanket broadband coverage from the tranquil heights of the stratosphere. Hovering at 65,000 feet, each blimp could provide phone, TV and high-speed Internet to an area about the size of Texas, without the lag times that have plagued satellite-based communications. Stratellites can even daisy-chain to link cities and rural areas across the country—all without a single new wire touching the ground. 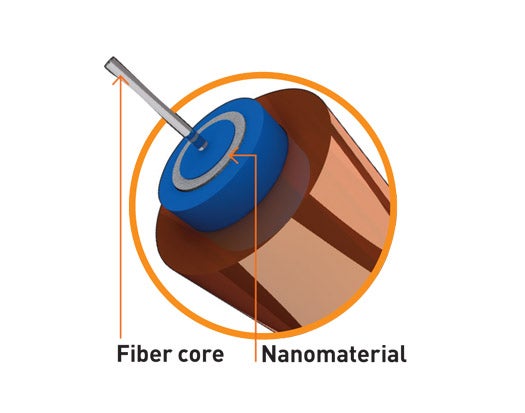 Corning’s new, flexible ClearCurve cable features a nanomaterial mesh wrapped around the cable core that keeps the photons in line even when stapled, bent, or twisted around a nail—usually any such quick turns would make the line go dark. That means telecoms can finally put fiber-optic lines into people’s homes, where cables often run up against right angles and tight squeezes from the sidewalk to the house. Verizon is already using the cable for its FiOS service.