In April, a team from Glasgow School of Art will shoot lasers at the heads of George Washington, Abraham Lincoln,... 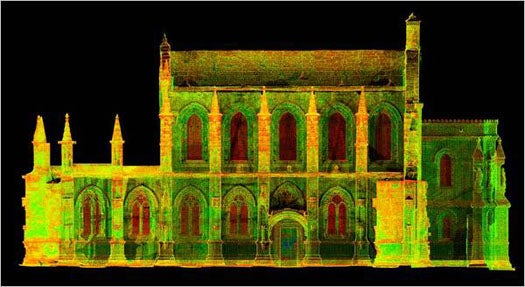 In April, a team from Glasgow School of Art will shoot lasers at the heads of George Washington, Abraham Lincoln, Teddy Roosevelt, and Thomas Jefferson. And they will do it all in the name of preservation.

The Scottish artists have perfected a system of laser scanning giant monuments, ensuring the digital preservation of even their finest nooks and crannies. They have already completely digitized Scottish landmarks like Rosslyn Church and Stirling Castle. The team is also working in conjunction with CyArk, a non-profit dedicated to laser scanning 500 UNESCO world heritage sites.

The artists use a specialized laser scanner that records 50,000 points per second. They simply sweep the laser across the monument they’re looking to digitize, and a receiver records the minute changes in range as points in 3-D space.

An inventor, and co-founder of CyArk, created the process in the wake of the Taliban’s destruction of the giant Buddha statues in Bamiyan, Afghanistan. Armed with precise measurements of monuments taken with the laser device, engineers could reconstruct an exact replica of any site that suffers destruction similar to the Buddhas.

Of course, these scans do more than just provide a blueprint for future restoration. When combined with high-def 3-D graphics, the library of images created with laser scanning could one create a basis for virtual tours of the world’s most impressive monuments.

Additionally, the scanning of regular buildings with this technology would allow the construction of incredibly detailed virtual cities. Placed on the Internet, users could roam these virtual cities or model the effects of new construction projects.