Star Trek introduced the world to a wide range of fictional technology, most of which, like beaming or warp drive,... 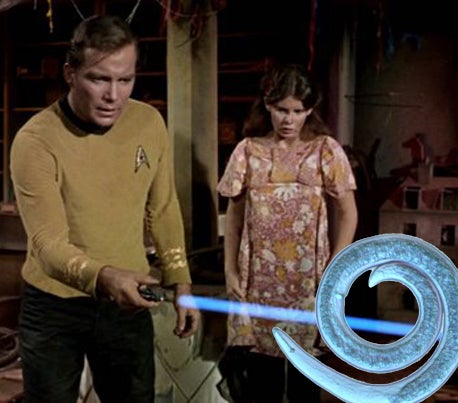 Star Trek introduced the world to a wide range of fictional technology, most of which, like beaming or warp drive, will likely remain fiction. However, a team of scientists from the University of Canada has taken the phaser, the show’s famous stun-laser, out of the TV and into reality. Unfortunately, right now it only works on worms.

Dithienylethene is but one of many chemicals that change shape when exposed to different wavelengths of light. These photo-activated compounds hold promise as targeted, cancer-fighting drugs, and this is the first time they have ever been shown to work in a living animal.

As for their future as a part of a super stun weapon, lead researcher Neil Branda of the University of Canada was oddly noncommittal, telling the BBC, “I’m not convinced there’s a legitimate use of turning organisms on and off in terms of paralysis, but until somebody tells me otherwise, I’m not going to say that there isn’t an application.”

Um, so, are we getting our phaser or not? Get on this, Branda!