The naked mole rat is immune to cancer. At last, scientists have figured out why 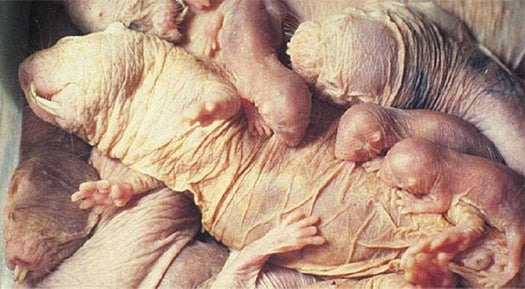 Naked mole rats are unique in many ways. For one, they’re the only mammals with a hive mind, obeying their queen as if they were ants. Also, they feel no pain, an adaptation still not fully understood. But most importantly for us, they are the only animals that don’t get cancer.

And now, a new study by scientists at the University of Rochester, New York, explains at last why these horrific animals, of all of the world’s creatures, are immune to cancer.

According to the scientists, the mole rat’s cells express a gene that tells cells to stop dividing. The gene, called p16, forms a second ring of defense against cancer. Most mammals, including humans, only have one gene, p27, protecting cells from cancer. And while most cancers know a way around p27, p16 stops them cold.

In the experiment, researchers gave cancer to a mole rat cell. However, unlike similarly altered mouse cells, the cancerous mole rat cell didn’t engage in the non-stop proliferation associated with cancer.

Naked mole rats were already known for their extreme longevity, living much longer than other similarly sized rodents. This was thought to result from their ability to massively slow down their metabolism during times of privation, but this immunity to cancer almost certainly also contributes to their long lifespans.

Some other mole rat facts: their lips are behind their front teeth, they breathe mostly through their skin, and acid doesn’t really burn them. I don’t know what planet these things are from, but if they’re helping cure cancer, I’m glad they’re here.