Adding a new wrinkle to the ‘droid versus iPhone debate, a project at Keio University in Tokyo have created iPhone... 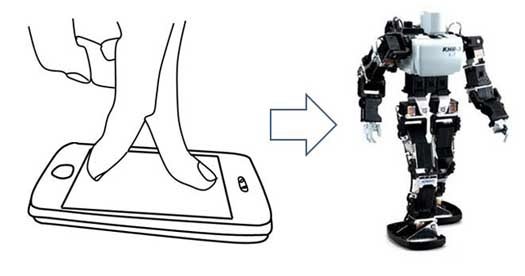 Adding a new wrinkle to the ‘droid versus iPhone debate, a project at Keio University in Tokyo have created iPhone software specifically designed to control androids. More specifically, they’ve created an interface that puts control of a humanoid robot right at your fingertips.

“Walky” takes advantage of an iPhone or iPod’s touchscreen to create an intuitive interface that requires virtually no learning. Your fingers simulate the robot’s legs: a walking motion using the index and middle fingers makes the robot walk, tapping the screen makes it jump up and down, and a flicking motion with one finger elicits a kicking motion.

The idea is to make the robot’s motion as intuitive as possible. Most controller commands, like joysticks, paddles and buttons, don’t have any natural relation to each other. That’s why you keep getting fragged in Modern Warfare; until you become very familiar with the controls, your knee-jerk reactions aren’t necessarily the ones programmed into the game. By making the robot respond to commands that the user already knows, they’ve created a sort of universal remote that anyone can pick up and start using.

On that note, the team at Keio thinks their software could also be employed in controlling digital characters — think on-screen avatars in video games — but for now it’s best suited to bipedal robots. While it won’t be integrated into gadgets this holiday season, it will debut officially in December at SIGGRAPH Asia in Yokohama.