Over the weekend, Cern ran particle beams through the Large Hadron Collider for the first time since it was shut... 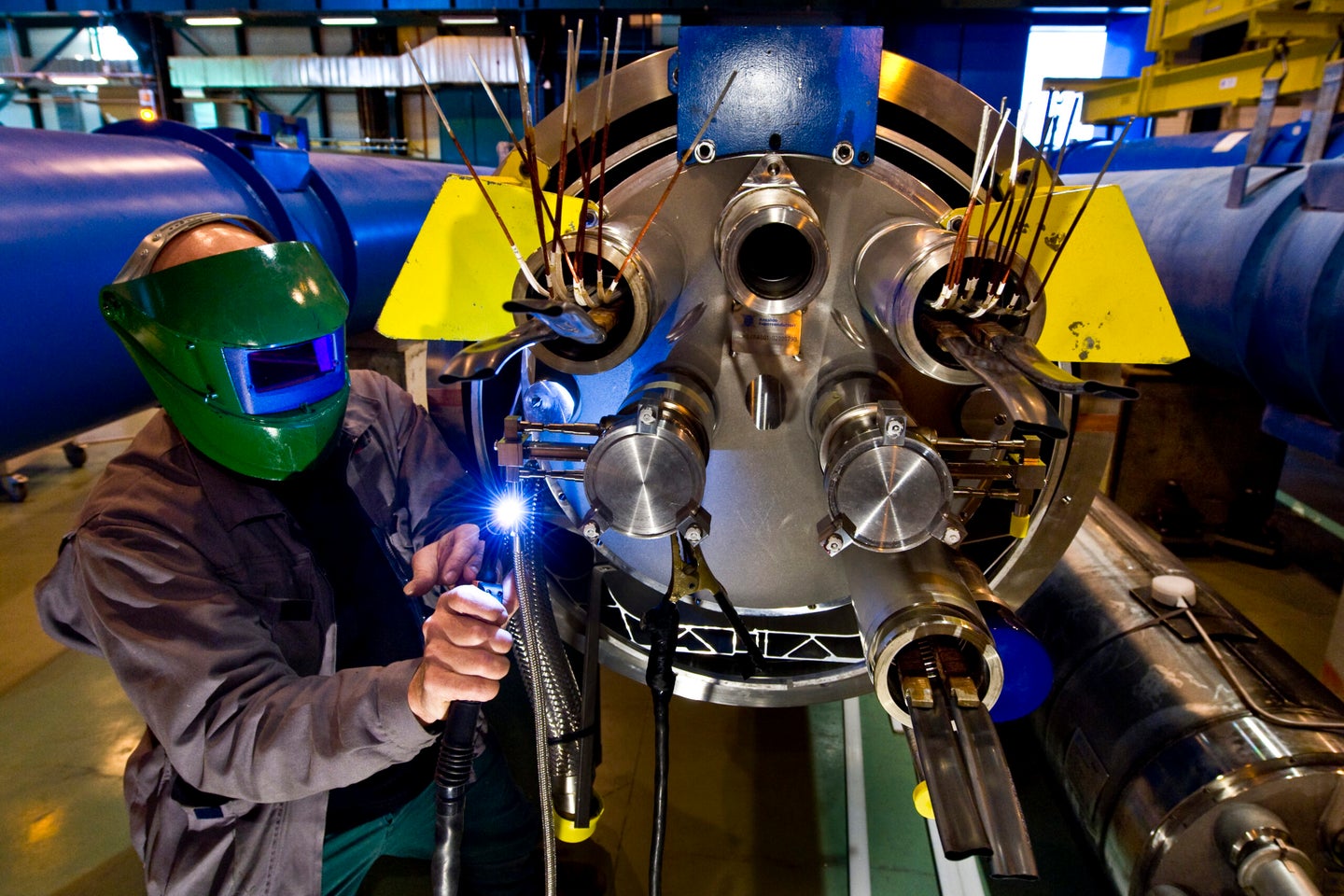 Cern's damaged magnets underwent repairs at a nearby above-ground site. This man is working on the end of a dipole magnet, which contains six conductors, each of which carried 8,000 amps but were capable of conducting up to 13,000. In superconducting magnets like this one, the internal materials are kept at some of the lowest temperatures imaginable, decreasing resistance and allowing them to generate electricity with virtually no loss of heat. Courtesy Cern
SHARE

Over the weekend, Cern ran particle beams through the Large Hadron Collider for the first time since it was shut down last September. After a helium leak caused magnets to overheat, operations at the LHC were suspended for cleanup and repairs. After tests on October 23 and 25, scientists hope to have the LHC running again in full by November.

The LHC ring — which measures 17 miles all around — is divided into eight sectors, two of which were tested this weekend. Scientists introduced proton and lead ion beams clockwise and counterclockwise through the 2.2-mile-long sectors. Cern reported that results showed “a perfect functioning of the machine,” in preparation for a fully circulating beam next month.

Superconducting magnets in the LHC function at a temperature of 2 Kelvin — that’s two degrees above absolute zero. Maintaining this kind of cold requires the use of superfluid helium, which in turn allows the electrical current to pass through without encountering any resistance, Cern’s Christine Darve told PopSci.com. By sending the intense proton beams through what she calls a “moon vacuum,” scientists are able to reap 100 times more energy than through a normal magnet.

By 2011, scientists hope to accelerate the proton beams up to 3.5 trillion electron volts, but this weekend they started out with just 450 billion. Collisions of the beams as they travel at near lightspeed may yield new particles, which scientists hope will provide clues about the Big Bang and the nature of the universe.

While this may be possible in the future, scientists are now glad to see that the magnets, which are connected by six conductors capable of transmitting up to 13,000 amps each, are once again in working order.