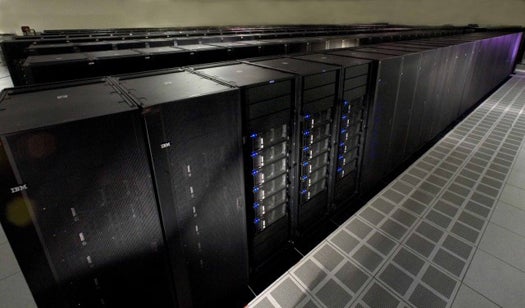 In November of last year, scientists at Los Alamos National Laboratory switched on Roadrunner, the world’s fastest computer. IBM and the Department of Energy built the machine to model nuclear explosions, but two new studies, both released today, are proof that the computer’s massive power has been at least as devoted to peaceful science as to simulating thermonuclear weapons.

In one experiment, the Roadrunner created the largest family tree of HIV ever produced. The family tree incorporated over 10,000 HIV DNA sequences culled from over 400 infected subjects. And in another use, Roadrunner simulated the Big Bang in an attempt to figure out how dark matter came to pervade the universe.

For the HIV study, Roadrunner donated its processing power to allow scientists to compare the ecosystem of viruses across a number of different patients. A single person can have as many as 100,000 different versions of the the HIV virus in their body at once, and learning how these mutants branch off from the initial infecting agent could help develop a vaccine. Until now, doctors didn’t have the computing power to analyze that many sequences at once. By looking at so many different strains across so many different people, the researchers hope to find common elements that a vaccine could attack.

The dark matter story, on the other hand, fell more into Roadrunner’s wheelhouse, since the explosion of the Big Bang isn’t too dissimilar from the hydrogen bomb detonation Roadrunner was originally tasked to perform. To create the model of the early universe, Roadrunner calculated the physics behind 64 billion proto-galaxies, each one about the size of of a billion of our Sun. Once Roadrunner crunched those giant numbers, the results predicted five-times more dark matter than astronomers have observed to date.

All that, and I bet you could play a pretty awesome game of Call of Duty, too. Although I guess that would defeat the “swords to plowshares” vibe of using a computer designed to model nuclear weapons for helping medicine and physics.

[via Science Daily and Physorg]