And it significantly reduces the risk of passing on faulty mitochondria 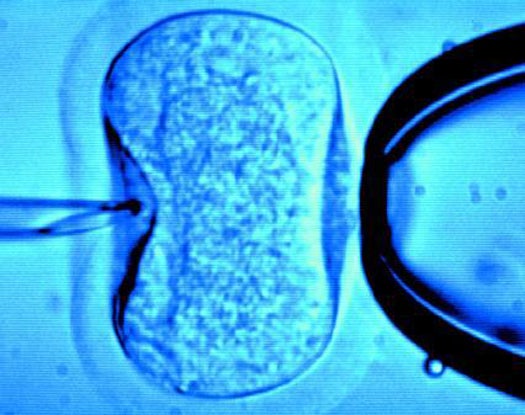 Three-parent babies are moving closer to reality: Researchers say that a new technique that combines the genetic material of three different people into a single embryo is safe and should result in a normal pregnancy. They published the results of their study in the journal Nature yesterday.

This technique, known as “early pronuclear transfer” and used in conjunction with in-virtro fertilization, has only been tested in the lab so far, but was approved for use last year in the UK. It was developed as a way for mothers who carry genes for faulty mitochondria to avoid passing it down to their children. Mitochondria provide energy for cells, but when they don’t function properly, that can cause inherited heart, brain, and other disorders in the newborn. Now researchers who studied the embryos created with the new technique say it is safe enough to use in clinical trials.

During the process, a woman (who herself has genes for faulty mitochondria) and a man would fertilize an egg. Then doctors would remove the essential DNA information from that fertilized egg, but leave the faulty mitochondria behind. They would then take an embryo from a woman donor and remove the nucleus, which contains its DNA, and leave the healthy mitochondria in. While mitochondria does contain some DNA, that information doesn’t translate into physical traits. Finally, they would implant the DNA from the fertilized egg into the empty embryo. ​ The study looked at 500 eggs from 64 donors to see if first the procedure would have any negative impacts on the embryo’s development and secondly, how successfully was it able to stop the transmission of faulty mitochondria.

It found that while the procedure was, in fact, safe, and didn’t negatively affect embryonic development, it didn’t prevent the transmission of faulty mitochondria 100 percent of the time.

But, the researchers note that this procedure significantly decreases the chances of it creating negative effects on the child. Of all the embryos that were studied, the researchers found that 79 percent of them had less than two percent of faulty mitochondria. As The New Scientist reports, children usually aren’t affected by this as long as they have less than 30 percent of faulty mitochondrial DNA.

According to the BBC, this study will be used to demonstrate the procedure’s safety to show to the the UK’s Human Fertilization and Embryology Authority (HFEA), which is similar to America’s FDA, as a next step to eventually allowing the researchers to apply for a licence to perform the technique for women of high risk.

In the United States, scientists have urged the FDA to approve the technique as well. But they are still waiting on final approval by the advisory agency to begin clinical trials.