Sugar Maples In The Adirondacks Are Mysteriously Tapping Out

What will we put on our future breakfasts? 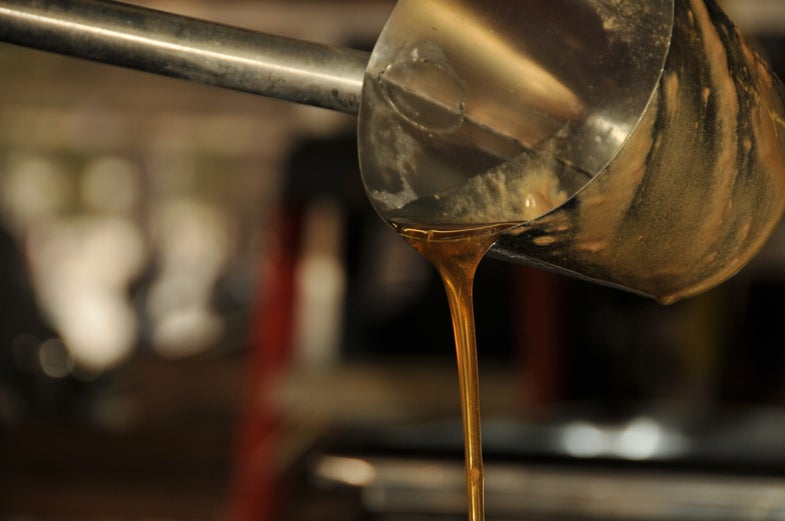 It is a truth universally acknowledged that pancakes or waffles of delicious fluffiness must be in want of maple syrup.

Maple syrup is the sticky glue that holds breakfast together. It’s also an incredibly valuable industry, which thieves illustrated very clearly in 2012, when a group made off with $18 million worth of maple syrup from a Canadian factory. (The trial started this week). But scientists are worried that the scrumptious river of concentrated tree sap might be drying up in the Adirondacks, and no one knows why.

As a part of his master’s thesis, Daniel Bishop began studying the status of sugar maples in the Adirondacks. Part of Bishop’s research was just published as a study in the journal Ecosphere, in which Bishop and his co-authors found that the sugar maples’ growth in the region has been declining for nearly 40 years. By looking at tree rings,

“Given their relatively young age and favorable competitive status in these forests, these sugar maples should be experiencing the best growth rates of their lives. It was a complete surprise to see their growth slow down like this,” said Bishop. “But our data tells a clear story. We can detect the start of a region-wide downturn after 1970, with a large proportion of the trees continuing this trend over recent years.”

In 1970, the main threat to sugar maples and many other trees in the region was acid rain, caused by air pollution from factories. The effects of acid rain on forests, mostly weakening trees and stressing the soil are well documented. But in the intervening decades, pollution controls have limited the amount of acid rain in the region, so the trees should be rebounding. For some reason, they aren’t, and scientists aren’t sure why. It could have something to do with the lingering effects from acid rain, or climate change, but further studies are needed to pinpoint a cause.

Don’t panic and start creating your maple syrup stockpile just yet. The researchers still don’t know if this slowed growth rate is just limited to the Adirondacks, or if the strange phenomenon is also in other maple-syrup-producing areas, like New England and Canada.

“Time will tell if slower growth is a harbinger of something more serious for sugar maple,” said Colin Beier, who oversaw Bishop’s research. “But given the ecological, economic and cultural importance of this tree, the stakes could be high. We need to sort out whether these declines are more widespread, the reasons why they are occurring, and what their implications might be for our ecosystems and local economies.”