Google begins rolling out its new Web browser, Chrome, setting the stage for a showdown with Internet Explorer producer Microsoft 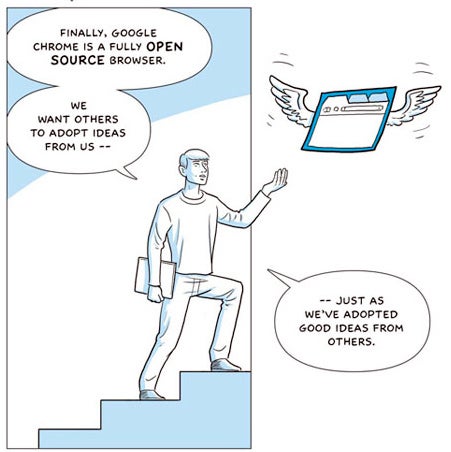 A lot has changed since the 1990s when the search engine of choice was AltaVista, when Internet connections ran through a phone line, and when Netscape battled Internet Explorer for browsing supremacy. Now Google, apparently nostalgic for the days of Presidential impeachment and O.J. Simpson, has reignited the wars with the roll out of its new application, a browser named Chrome.

Google made the beta version of Chrome available for download this morning, after previously releasing this [somewhat broken] online comic to explain what makes it different from all other browsers. Chrome features a very stripped down interface with no top bar for the “File,” “Edit” etc. menus. The program looks sleek, but flatter than the famed Mac aesthetic. Under the hood, Chrome takes a page from operating systems by compartmentalizing the activities going on in different browsing tabs. Similar to the way Windows or Mac OS runs different programs at once, Chrome runs Java or Flash or whatever other system discretely, allowing users to close a single tab that has crashed rather than having to restart the entire browser. Like Firefox and Mozilla, Chrome is open source, so users will be able to develop add-ons and improve the stability of the program. Additionally, the URL bar is also the search bar, and when something is typed into the box, Chrome gives both likely Google search and URL results. And of course, Chrome has an “incognito” mode (a.k.a. porn viewing mode) where the browser doesn’t record any history of the sites visited or the passwords entered.

Chrome’s focus on media integration and operating system like construction has surely grabbed the attention of the current leader in browser sales, Microsoft. Microsoft and Google have been on a collision course for some time now. First Microsoft failed to buy Yahoo in its bid to get into the Internet search game, now Google has attacked Microsoft where it lives. Internet Explorer has long been an important tent pole for Microsoft, and it was the bundling of Internet Explorer with Windows that lead to the anti-trust suit against Microsoft. Apple might not be safe either, as the rumors about Android, the Google-related mobile device set to compete with the iPhone, begin to heat up yet again. With a new operating system and a new phone, Google seems positioned to step into the ring as a computing heavyweight like never before. But with a near-monopoly on Internet search and the possibility of a Google phone running a Google browser for people to use Google search with, Google is looking less like a nimble Web 2.0 company a more like the Apples and Microsofts it hoped to replace. Meet Chrome, same as the old boss.