Google Teams Up With Dish Network For Android-Powered TV Experiment 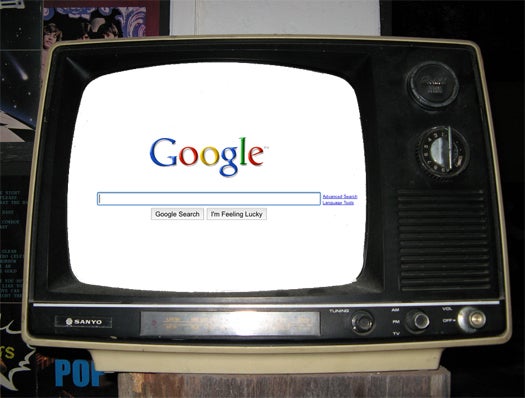 Stuart Fox, from a liewcf original, via Flickr.com
SHARE

No longer simply content to rule the world of computers, the Google juggernaut has teamed up with Dish Network to bring its targeted ads and search power to the world of television. The project, currently in the testing phase at some very lucky Google employees’ houses, brings customized TV schedules, advertising packages, and web video via YouTube out of the computer and into the living room via an Android-powered set-top box.

Powered by the same Android OS that runs Google’s smartphones and a host of forthcoming tablet devices, the box enables users to search for TV shows and web clips with a keyboard instead of a remote. And, since this is Google we’re talking about, one can only imagine that an algorithm will eventually analyze those searches to help direct personalized advertising via their TV ad service.

Google started testing the boxes a year ago, and both Dish Network and Google have kept mum on the project the whole time. However, with both Microsoft and Apple lustily eyeing the TV market, and with many television companies trying to integrate more web features into their cable offerings, the revelation that Google has been working on technology that bridges the gap between television and the Internet should surprise no one.

Thus far, Google and Dish Network have continued their silence on the project, and no one knows when the service will become commercially available. However, Google’s TV ad service has already been active for some time, and the Android OS has proved versatile across a range of platforms. If Google can combine its search engine power and Android architecture with the program selection of Dish Network, the Google box might become the odds-on favorite to win the coming battle over television/Internet integration.