Should you risk COVID-19 for a cancer screening?

Health care facilities are urging patients back for routine tests, but financial incentives may result in murky motives. 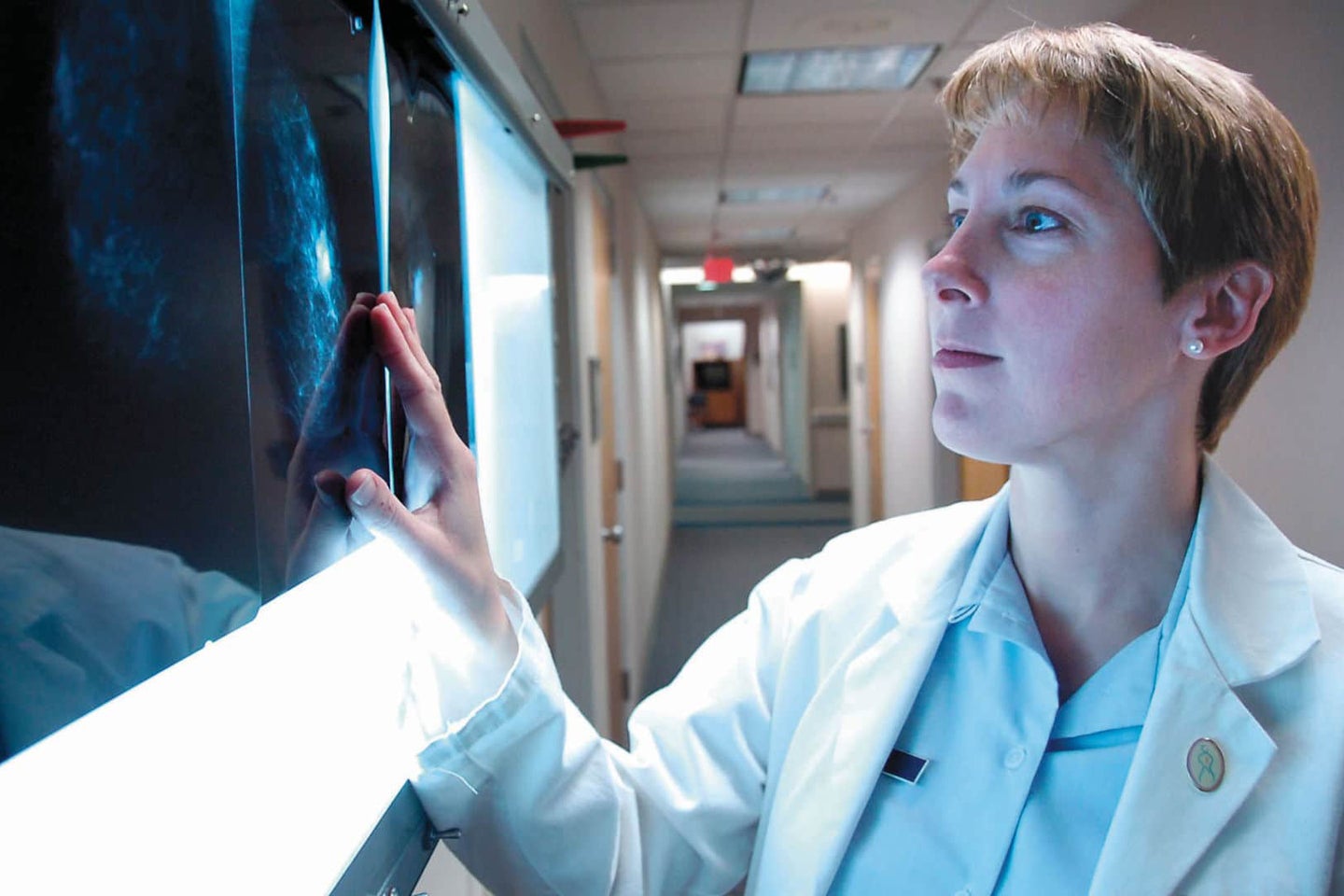 Teresa Carr is a Texas-based investigative journalist and the author of Undark’s Matters of Fact column. This story originally featured on Undark.

Last spring, a reminder popped up on my calendar that I was due for a couple of routine cancer screenings. But healthy me wasn’t going anywhere near a health care facility in a pandemic—and apparently, the rest of America had similar thoughts. Screening for breast, colon, and cervical cancers fell as much as 94 percent in March compared to averages from the same time period over the last three years, according to an analysis of 2.7 million health records by the health care software company Epic.

As the pandemic has worn on, though, many doctors and health care facilities are beckoning patients back, telling them it’s safe and prudent to schedule appointments, that delaying screenings can do more harm than good by causing a dramatic spike in undiagnosed and untreated cancers, and that screening exams can save your life. Entreaties like these often play to people’s sense of responsibility and fear. A recent article in USA Today quotes Therese Bevers, the medical director of the University of Texas MD Anderson Cancer Center: “People should understand that they are more likely to die from cancer that has progressed as they sit at home to prevent COVID-19 … than they are to die from COVID-19.”

In an editorial for Science magazine, Norman Sharpless, the director of the National Cancer Institute, puts a number to the likely effect of the pandemic on breast and colorectal cancers, which together account for about one-sixth of all cancer deaths. NCI modeling projects that nearly 10,000 more Americans will die of those cancers over the next decade due to delays in screening and treatment, Sharpless noted—a 1 percent increase over the roughly one million deaths from those diseases expected during that time.

That sounds grim, but some critics are beginning to push back on the screening narrative, suggesting that patients aren’t getting the sort of nuanced information they need. Not everyone, they say, needs screening right now, and whatever the potential fallout from skipped screenings, it needs to be considered against the risks of the novel coronavirus.

H. Gilbert Welch, a senior investigator in the Center for Surgery and Public Health at Brigham and Women’s Hospital in Boston and a long-time critic of unnecessary tests and interventions, for example, suggested that even when taking what he called the NCI’s “back-of-the-envelope calculation” at face value, the predicted excess cancer deaths over the next 10 years still represent only a small fraction of U.S. COVID-19 deaths from the last six months. What’s more, Welch adds, the NCI analysis conflates routine screening with seeking care for actual symptoms. “Those are really, really different,” he says. A woman with a lump in her breast should be encouraged to come in for a diagnostic mammogram whatever the local COVID-19 risk, Welch noted. “But it’s a totally different kettle of fish about whether we should be inviting everybody else in to get screened and making them feel bad about it.”

That’s because while there’s no doubt treatment saves lives, the same can’t be said for some screening tests, which in some cases do more harm than good. That discomforting fact has long led to disagreements about who should be screened when and whether a screening creates more trouble than it’s worth. COVID-19 just adds another dimension to those decisions.

Welch and others who research the impact of screening also view this unprecedented pause as an opportunity to rethink blanket screening mandates in favor of what makes sense for individuals based on their medical history and preferences—not just during a global pandemic, but as a matter of standard operating procedure. After all, if the benefit of a treatment or test is not worth the risk now, says Bishal Gyawali, summarizing the argument of an editorial he and colleagues from Queen’s University in Kingston, Ontario published in JAMA Oncology last month, “then we need to actually seriously consider was it actually warranted even before the pandemic.”

By definition, a screening test looks for unrecognized disease or risk factors in people without symptoms. “A good screening test is one that will inform or change what we do in a way that will improve someone’s health and quality of life,” says Alex Krist, an associate professor of family medicine and population health at Virginia Commonwealth University and chair of the U.S. Preventive Services Task Force, an independent, volunteer panel of experts that advises the public on preventive care. By that measure, blood pressure checks are a great screening tool; by detecting and treating hypertension, which commonly causes no symptoms, you can reduce the risk of heart attack by 20 percent and stroke by 30 percent.

At the same time, “harms can come downstream from testing,” Krist adds. Those harms include unnecessary tests and procedures to chase down false alarms, unnecessary treatment for benign abnormalities, and the anxiety of suddenly transforming from a healthy person into a patient.

With some screenings, especially those for certain cancers, the benefits only marginally outweigh those risks. For example, a 2018 analysis in the Journal of the American Medical Association summarized the data for breast cancer: Screening 10,000 average-risk women in their 40s annually for a decade may avert three deaths, but 32 will die of breast cancer despite screening and 28 will be “over-diagnosed” and treated for slow-growing cancers that likely would never have hurt them. More than six in 10 will experience false alarms that require follow-up with more scans or biopsies.

Messaging about screening often focuses on the idea of “saving your life” while glossing over those messier uncertainties. Am I really risking my life by delaying or even skipping a mammogram this year? It’s unlikely said Welch, who was lead author of an analysis of four decade’s worth of cancer statistics published in the New England Journal of Medicine last October. Cancer death rates have dropped in the last 40 years, Welch and colleagues found, but for the most part that wasn’t due to screening.

“First and foremost, this is largely about a decline in smoking and the resulting drop in lung cancer deaths,” Welch says. We can also thank improved treatments for breast, prostate, and a few rare blood-borne cancers. Early detection has played a role in reducing colon and cervical cancer deaths, but they were already trending downward before the advent of widespread screening. For reasons not fully understood, those diseases, as well as stomach cancer, are occurring less frequently.

Overall, the incidence of cancer is on the rise, though, driven by more diagnoses of breast, prostate, thyroid, kidney, and melanoma skin cancers. Meanwhile, people die of thyroid, kidney, and melanoma skin cancers at much the same rate as in 1975. “What we are seeing is not a true increase in cancer occurrence,” said Welch. “It’s overdiagnosis of nonlethal cancers detected mostly through screening.”

So, what can the NCI models tell us about the impact of screening delays alone on cancer deaths? The institute shared unpublished data for the scenario where, for six months, 75 percent of people due for a breast or colon cancer screening skipped it. In that simulation, the estimated increase in cancer deaths was two-thirds lower than when treatment was also delayed. While the models are capable of computing the harms of screening—including overdiagnosis—NCI researchers told me, they opted not to factor that in.

The data presented in the Science editorial is just an interim look at a much more thorough work in progress, Sharpless tells me. The pandemic has provided a possibly once-in-a-lifetime chance to examine what happens when health care as we know it grinds to a halt. “This—call it an experiment of nature, if you will—provides a real research opportunity to understand this complex topic of screening and overdiagnosis and overtreatment,” he says, “which is an area that’s been of interest to the NCI for decades.”

“This is also an opportunity to consider new technologies for screening, particularly things that can be done at home like self-sampling for cervical cancer,” says Sharpless. While still investigational, that test could be life changing in low- and-middle-income countries where cervical cancer is the leading cause of cancer deaths in women. “I don’t think patients are going to want to go back. I think they really like telehealth and some of the things we’ve been able to do,” he said. “If there’s a silver lining to all of this it’s been that it forced us to be innovative.”

Maybe, but the marketing suggests that medical centers are eager to return to the pre-pandemic status quo. “The system needs patients,” Welch says. There’s a financial incentive to screening because it involves lots of people and reliably generates income from follow-up testing and procedures. Of course, major medical centers are big businesses that want patients back, he says. “That’s totally understandable. But we want to make sure that our system needs don’t trump our patient needs.”

Krist makes the case that now is the time to address oft-neglected issues related to mental and behavioral health: “The U.S. Preventive Services Task Force has recommendations about screening and counseling on unhealthy alcohol use, on diet and exercise, on weight loss, and depression.” Given that we know the pandemic has exacerbated these issues, preventive services to help people deal with them can be more impactful than the tests people fixate on, he said. “And, actually, they’re not dependent on being seen in person to deliver.”

Like everyone I spoke with, Sharpless offers advice that is more nuanced than the marketing. Most importantly, people with symptoms or who are undergoing treatment for cancer need to be seen, he says. “For some people cancer is a way bigger threat [than COVID-19] and it should be driving their decision making.” But my routine screening mammogram? “That could probably be deferred for a while,” he says.

According to Krist, who is a family practitioner, the “right” decision is wholly dependent on the individual patient. For someone who’s at higher risk of disease and not up-to-date on screenings, it could be worthwhile to don a mask and brave the clinic. But even then, if you have a compromised immune system and the level of COVID-19 is high, you might still want to wait, he says. “Those are the type of tough decisions that patients and doctors have to make together.”

But Gyawali, who writes a column on “Common Sense in Oncology” for Medscape, argues that both now and post-pandemic, those decisions should be based on evidence, not fearmongering among patients. “My biggest disappointment is that we are putting fear in people’s mind, which is not healthy,” he says. “How much fear have we put into their hearts that they are worried about not being able to do screening at the time of a pandemic? That means that the fear is quite real and it’s quite big.”