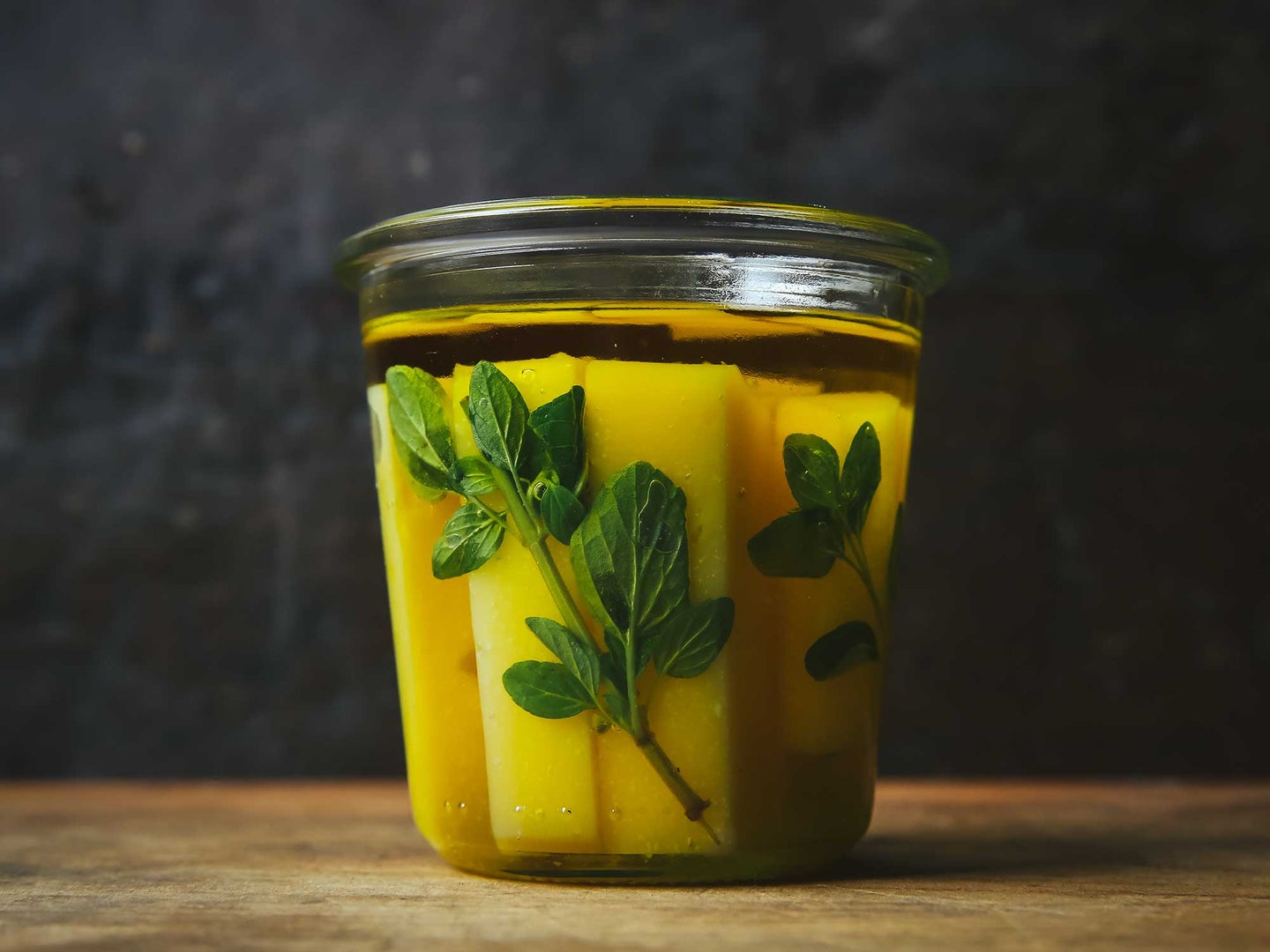 It's just cheese, olive oil, and some herbs or spices.
SHARE

When Pedro, my host father, offered me some cheese, I didn’t expect him to reach into the kitchen cupboard. The previous weeks as an American teenager in Castilla-La Mancha had felt like Spanish culinary hazing: I’d survived blood sausage, octopus, even pig ears a la plancha—but unrefrigerated cheese on a 100-degree day? That sounded downright hazardous.

Then Pedro handed me a jar. Filled with glistening white cubes suspended in yellow-green olive oil, it didn’t resemble any cheese I’d ever seen. “This is my mother’s queso en aceite,” he said with a wink, “and I think you’ll like it.” He twisted the jar open, handed me a toothpick, and motioned for me to fish out a hunk of cheese. It was rich, nutty, and thrillingly salty—nothing like the bland manchego I’d tried in the States. I felt the urge to scamper off to my room with the whole container.

Queso en aceite (literally, “cheese in oil”) is what happens when manchego and olive oil get cozy. Left to intermingle for weeks or months in a jar (traditionally an earthenware orza jug), the oil gradually permeates the creamy sheep’s milk cheese, softening it and imparting a compelling, throat-catching piquancy. Little did I know that a few months prior, that very cheese would’ve been too dry to eat out of hand. The oil, in essence, had resuscitated it.

“Cheese has been oil-cured as a means of preservation for centuries in Spain,” says Clara Díez, co-owner of Quesería Cultivo, a boutique cheese shop in Madrid. She explains that the fat acts as a barrier to undesirable yeasts and bacteria, keeping the cheese fresh and safe to eat, even when temperatures soar. The preserve is such hardy stuff, in fact, that Christopher Columbus packed it alongside salt cod and hardtack on his transatlantic voyages.

But like many foods that were created for their indestructibility—we’re looking at you, duck confit and jamón Ibérico—queso en aceite has endured into the refrigeration era for its distinctive flavor and texture.

“It really sings on a cheese plate,” says Alex Raij, chef and owner of Spanish restaurants La Vara, Txikito, and El Quinto Pino in New York City, who infuses hers with za’atar for a tapa served with crackers at at El Quinto Pino. “We reuse the curing oil, topping it up whenever we need to, and the cheese is getting better and better with each batch. I think of it as a solera system of sorts.”

Part of the beauty of queso en aceite is that it’s dead-easy to make and infinitely adaptable. First, choose a hard cheese. Parmigiano-Reggiano, aged gouda, or even a crumbly cheddar will do the trick, but for the real-deal Spanish stuff, opt for an aged manchego. Trim off any rinds, cut the cheese into chunks or batons, and place them snugly in a glass jar along with any aromatics you fancy such as rosemary, chiles, or citrus zest. Fill the jar to the brim with your favorite extra-virgin olive oil, screw the lid on tight, and ya está—set it in a back corner of your cupboard, and forget about it for up to six months (though it’ll be ready for noshing after two weeks).

Today I live in Madrid, and Pedro and I are neighbors. We eat octopus, blood sausage, and pig ears together without thinking twice. But for him, queso en aceite, that humble yet ingenious recipe from his birthplace, will always hold special meaning. “After all,” he says, ”a good red, some cubes of queso en aceite, a place to sit outside surrounded by good friends—now, doesn’t that sound good?”