An eight-cylinder snowblower takes on winter in Canada 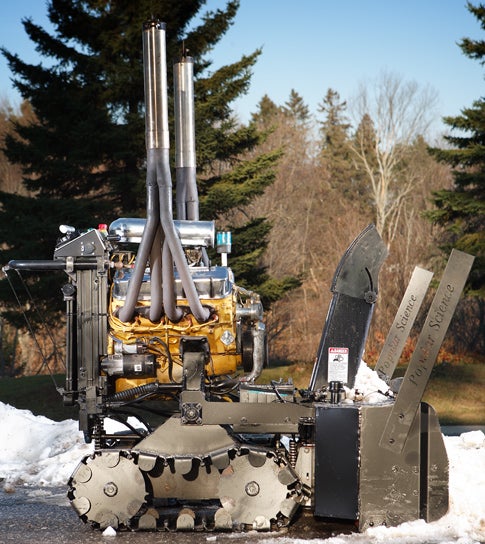 When Kai Grundt announced his decision to build the ultimate snowblower from a discarded V8 engine, a friend of his just laughed. So a year later, instead of showing his buddy the finished product, Grundt showed him what it could do. He buried the man’s truck under a seven-foot-tall pyramid of snow. From two houses away.

Since Grundt, a metal fabricator in Muskoka, Ontario, started with the huge engine from his old Chevy truck, he knew power wouldn’t be a problem. But the 800-plus-pound machine also had to be easy to handle. He didn’t want the snowblower racing away when he revved the blades that suck up the snow — the V8’s crankshaft spins them up to 6,200 rpm — so he chose to run its tank-like tracks via a different system. Powered by the 412-horsepower V8, a hydraulic pump feeds a pair of hydraulic motors that each turn one of the tracks. This allows him to give the blades a boost while keeping the massive machine moving at a safe pace. Using controls built into the handlebars, he can also turn one track forward and the other in reverse, spinning the rig in place.

Grundt is now designing a kit to let others build their own driveway-clearing monster, and this winter he hopes to set a Guinness world record for a brand-new category: long-distance snowblowing. He figures he’ll clear 100 feet easily.

How the V8 Snowblower Works

BLADES
The machine has an extra-wide auger and large customized blades to grab and throw the snow. The engine can spin the blades nearly twice as fast as a conventional snowblower, enabling it to blow thick snow a long distance.

COMFORT
Moving snow can be a frigid business, so Grundt installed a remote-start system to get the machine warmed up before he steps outside. The blower doubles as a heater, too. He faced the engine’s radiator toward the back; an electric fan blows excess heat right at his legs. He also built a hollow handlebar and rigged it such that the engine’s coolant flows through. The fluid heats the bar, keeping his hands toasty in the dead of winter.

NOISE CONTROL
Twin, custom-designed pipes ensure that there’s no exhaust streaming into the driver’s face during operation. Grundt also gave the pipes a series of interior channels that reroute and slow down the expelled air, dampening the noise. Cutting down on the decibel level keeps the neighbors happy.

DURABILITY
Early models of the snowblower used rubber tires, but Grundt decided to switch to tracks instead because the wheels couldn’t bear the weight or the cold. Even the dashboard-mounted gauges were chosen for toughness — he installed heavy-duty boat gauges, which are better equipped to withstand the freezing, snow-filled Canadian air.