How to donate your body to science

This is your chance to finally go to medical school. 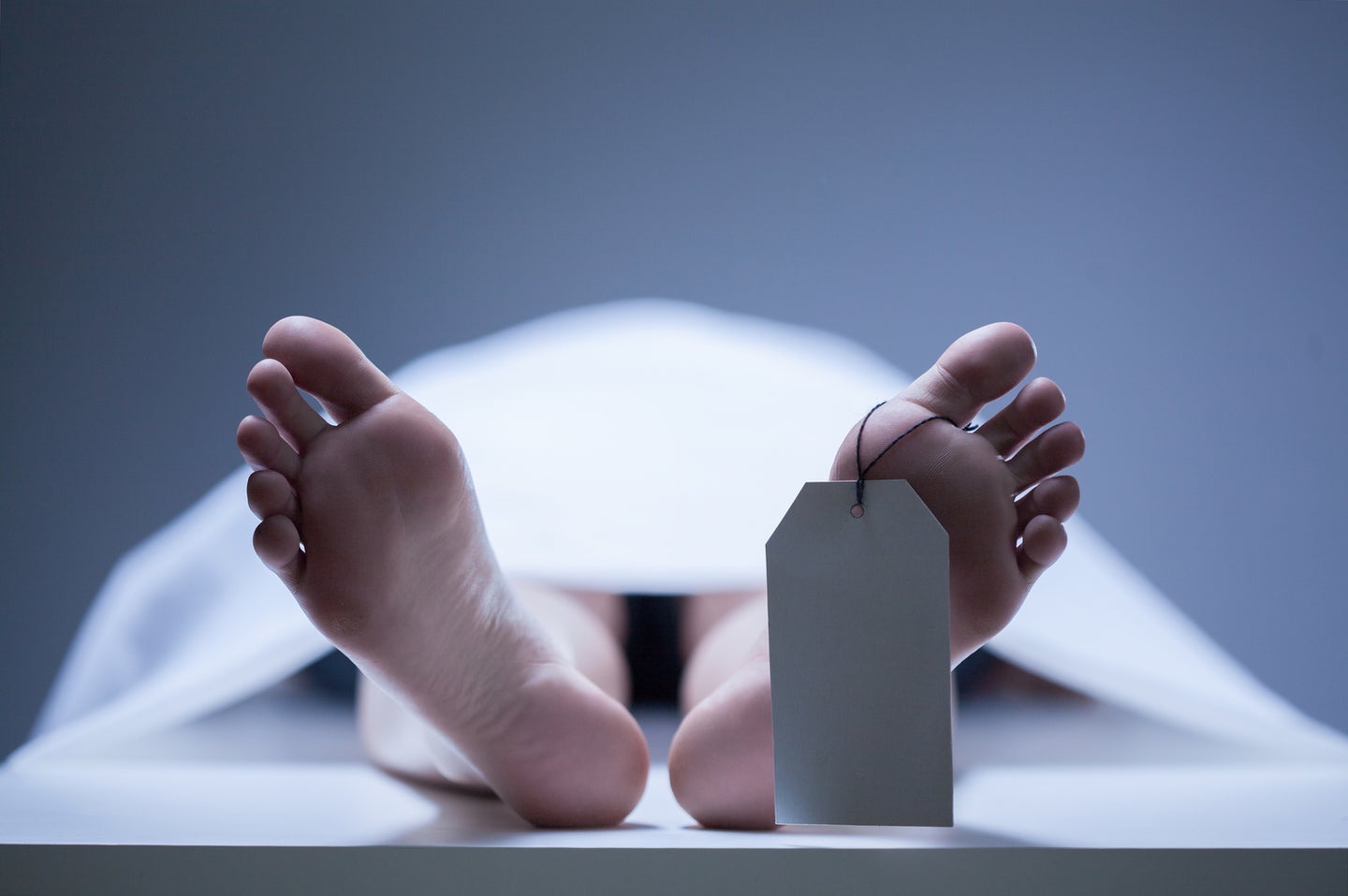 Make the most of your last hurrah. photographee.eu via Deposit Photos
SHARE

Ok, I’ll just go ahead and be blunt about it: We’re all going to die. No buts, no exceptions. Some will go sooner, some will go later, but death is something we’ll all have to deal with at some point, and you can’t just skip it.

What we do have some control over is what happens to our body after we go. Whether you go for a traditional embalming-burial combo, a greener burial, or a mushroom suit that will use your body as fertilizer, you can always plan to make something meaningful out of your inevitable demise, especially if you decide to donate your body to science.

It sounds a little macabre, but it makes a lot of sense. Medical students everywhere, along with all those training to be nurses, dentists, physical therapists, or even forensic investigators, need human bodies to learn and perfect the skills that will one day benefit hundreds, if not thousands, of living, breathing people.

Maybe you love science and want to help research advancement. Maybe you’d like to contribute to a cause close to your heart, like finding a cure for a disease such as cancer, Alzheimer’s, or Parkinson’s. Or maybe you just want to spare your family from spending thousands on a funeral—these average somewhere between $7,000 and $10,000. There are a lot of good reasons to donate your body to science, but before you find yours, just know it’s a real option and you should definitely consider it.

Donating your body to science is not the same as being an organ donor. The latter means you’re part of a program managed by the United Network for Organ Sharing, which matches patients in need of a transplant with potential donors via the Organ Procurement and Transplantation Network.

What makes whole-body donation slightly more complicated is that there’s no single organization or network that oversees the process of matching donors with medical schools and research programs. Instead, the steps you’ll need to take to become a whole-body donor will depend on where you live or where you want your body to end up.

Some states—such as Florida, Texas, Maryland, and Illinois—have state anatomical boards that serve as the go-to entity if you want to become a donor. Each one has only one process and one list of requirements, and it’s all laid out in detail on the board’s website. People living in these states have it easy, donation-wise, but the main caveat is that, in some of them, potential donors don’t get to choose the institution that gets their body when they die. Tracking someone’s remains and making sure they get into the right hands and back to their family again costs money. Most states just don’t indulge in that kind of luxury.

Other states, such as Missouri, run a hybrid system. This means they have a state anatomical board, but it operates like a whole-body donation program run by a medical school, research facility, or other non-transplant anatomical donation organization (NADO)—more on that later.

Finally, if you live somewhere without a state anatomical board, things will be more interesting (or complicated, depending on your outlook in life). All you can do is directly reach out to one of a large number of institutions and find out if you qualify to pledge your body to them. The problem is that even though the process is largely the same, the conditions, rules, constraints, and requirements differ from program to program. So before you decide what institution you’ll donate to, you’ll have to get acquainted with a lot of information—and you still may not be eligible to benefit the one you like best.

Choose a program (whose needs you can suit)

If you want to help a particular research program, have an alma mater you’d like to contribute to, or a hospital you care for, they most likely have a whole-body donation program you can pledge to. If you just want to help science and don’t particularly care where your body ends up, there are organizations such as ScienceCare and AnatomyGifts that can help you with that too. Most institutions have comprehensive websites full of information, so it’s just a matter of googling or calling the one you’re interested in directly—they also have people standing by to answer questions from potential donors

The process is simple and largely the same: you contact them, and they ask you some questions about your medical history to determine your eligibility as a donor. (Some programs may even require you to go through a physical exam before they tell you if you qualify or not.) Each program has its own set of rules, but in general, the two major ones involve body mass index (BMI) and the presence or history of infectious diseases such as hepatitis and HIV.

“[These constraints for donation] ensure that institutions are able to provide safe and effective learning environments. For example, infectious diseases may transfer to students who interact with the donor’s body,” says Laura Johnson, a professor at the Department of Pathology and Anatomical Sciences at the University of Missouri, and director of the school’s Gift of Body program.

Potential donors with BMIs considered abnormal by clinical parameters at the time of death—meaning patients labeled either underweight or obese—are rejected by most programs.

“Emaciated and obese bodies make anatomy courses more challenging for students due to inherent logistics,” Johnson says. “For example, embalming can add 100 to 150 pounds to a body, which introduces hazards in the learning environment.”

Programs might also reject potential donors if their organs have been removed for transplant, depending on how extensive the donation. The same happens with bodies that have been autopsied by another institution. In both cases, the body has undergone invasive procedures that have destroyed not only the arterial structures required for embalming, but also the body itself, making it unsuitable for learning.

Bodies donated to science undergo a more thorough embalming process than the one funeral homes generally offer—it has to keep bodies looking fresh for up to two years, not just a couple of days while funerary rituals occur. Since the process is more complicated than simply pumping a body full of more embalming fluids, scientific embalmers want to work with untouched bodies. That means that whenever the corpse of a donor is manipulated by someone other than the program’s authorized embalmer, it automatically becomes ineligible.

This is a particularly pressing matter if you’re considering donating the body of next-of-kin after their death—yes, the Uniform Anatomical Gift Act of 1968 allows you to do so, even though some programs don’t allow it. The 48 hours following someone’s demise are usually fast and chaotic, and a lot of donations don’t come through because the decision is more of an afterthought once the corpse has already been sent to a funeral home.

This is also why it’s so important to do your research thoroughly and leave specific instructions before you depart this world.

This may sound obvious, but it’s actually one of the main things that go wrong with whole-body donations.

“Donors should talk to their loved ones about the decision to donate,” Johnson says. “They should share all the information they research with their family and talk thoroughly about whether this is the right decision for them.”

You see, even though it’d be great to have a little bell going off somewhere in the institution you pledged your body to the minute you draw your last breath, that’s just not how things go. There’s absolutely no way for them to know if you’re dead or not, so your loved ones need to know who to call and where to go when the Grim Reaper knocks on your door.

Donors often don’t disclose their decision to their families, either fearing judgement or because giving your body to science means your loved ones won’t have the opportunity to say goodbye in a traditional way.

“[Body donation] is a gift, but is also a sacrifice,” Johnson says. “While the donor and loved ones likely planned for a memorial at the time of the donor’s death, they also know that for some length of time after death, the donor is not yet put to rest.”

That’s because the donor’s body is used for a period between one and two years after death, depending on the program. Only after that, and depending on the terms of the donation, the donor’s remains are cremated and either returned to the family or scattered somewhere symbolic. At New York University, for example, unclaimed donors’ remains rest in the Garden of Remembrance at Rosedale and Rosehill Cemetery in Linden, New Jersey.

“Many programs do tell the families about the types of uses of the gift through a letter that is provided after the donation occurs,” according to a representative at the American Association of Tissue Banks, the only accrediting organization in the U.S. for NADOs.

Donate within your range

Most programs cover all the expenses associated with body donation, but some of them only do it within a specific distance radius. For example, if you choose to donate your body to The Anatomy Bequest Program at the University of Minnesota, transportation of the body will be free only if you’re donating within state lines.

If money is an issue—or you just don’t want to pay for a donation—your best bet is to look for programs within your home state. If you can find one you like within your city limits, even better. But if, for example, you have your heart set on donating your body to your alma mater, which happens to be on the other side of the country, know there may be some costs your family will incur. The good news is, it won’t be your problem.

Prepare to be rejected

Just as we can’t control the moment we kick the bucket, most of the time we also don’t get to choose how that happens. Even though you may have chosen to be a donor and went through the process of getting approved for your favorite program, there’s still a chance you might not be able to donate your body to science.

“An organization may have requirements for donation that may no longer be met at the time of death due to the manner of death, additional disease or surgical history, or other factors,” the AATB says.

Traumatic deaths are usually a deal-breaker when it comes to whole-body donation, as are any conditions treated by highly invasive surgery. This is why, according to the AATB, many programs suggest—or even require—potential donors to have a back-up plan, just in case.

As with every big decision in life, donating your body to science is all about research. If you’re thinking about it, do your homework, read about programs near you that might suit your needs, and let your loved ones know about your intentions.

And don’t put it off—you literally don’t know how much time you have.

body donation
death
DIY
how to